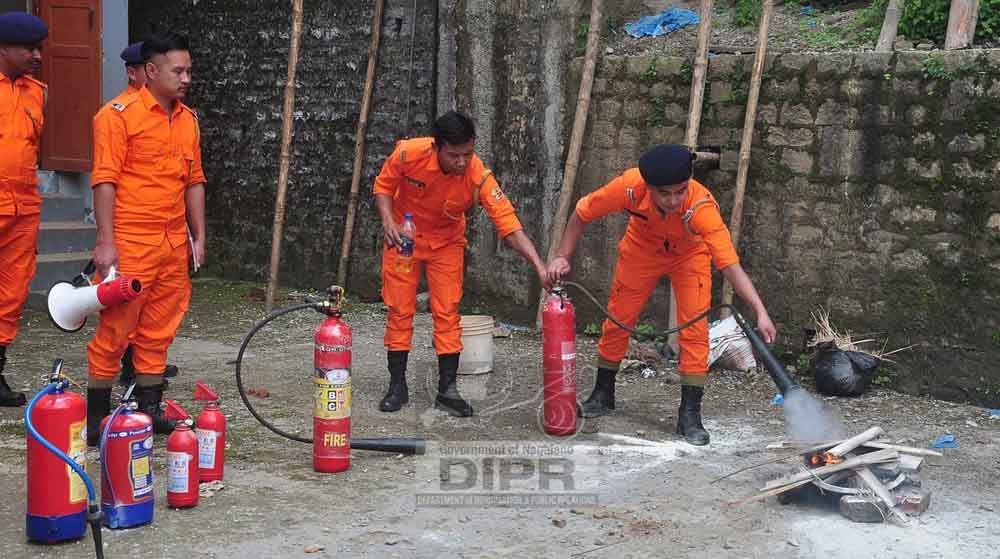 The aim of the training was to educate the general public on fire safety, code of practice, do’s and don’ts, etc.

Kohima: The training took place at the State Academy Hall in Kohima. Speaking during the training program, NFES Inspector Sedevizo Hibo emphasized that to ensure the prevention of fire recurrence in institutional buildings such as hospitals and state nursing homes, departments Nagaland Fire and Emergency were designated as the nodal department to carry out inspections. and fire safety auditing of hospitals and nursing homes (public and private sectors) in accordance with the National Building Code.

Hibo said there have been five incidents in hospitals and nursing homes in the recent past in the country, resulting in the unfortunate loss of life and property. He said the main objective of the training and the seminar was to create awareness among the masses to spread advisories to prevent fires in institutions such as hospitals, nursing homes and other public places as well as public places. private institutions.

He also informed that all government services and all high-rise buildings, private and public, should be ensured with fire safety measures. Stating that failure to comply with these measures, the officers, owners and owners of any high-rise building would be subject to prosecution under the relevant sections of the law.

Representatives from various agencies and stakeholders from state and central government departments, including public hospitals and nursing homes, schools, colleges and educational institutions, attended the training. The second training session will be held on June 21 with participants from shopping complexes, markets, hotels, churches and any high-rise buildings (15 meters), neighborhoods, settlements and villages in Kohima district.

Wokha: Deputy Commissioner Ajit Kumar Ranjan, speaking at the inaugural program at Tiyi Hall, Wokha, urged the trainees to pass on the skills to their departments as well as other sectors. He suggested that awareness programs be conducted at the school level to instil in children the need to take preventive measures during any disaster. The Deputy Commissioner further urged all citizens to follow government guidelines which are streamlined for everyone’s safety.

Officer in Charge of Wokha Fire Station Keleseho Stephen Tsukru while delivering the opening speech said the aim of the training was to raise awareness of the basics of fire fighting techniques, fire prevention , protection and other rescue measures to be taken. during fires and disasters, and sought the cooperation of the public in giving them fair and accurate information in an emergency so that they could save lives and property.

During the technical session, resource personnel from Fire and Emergency Services, ASI, Haying, ASI Yibenthung and SI, Menose dwelt on various topics such as fire basics, prevention systems and fire protection according to NBC 2016, and the do’s and don’ts in the event of a fire. . Later in the day, a demonstration on the use of fire extinguishers was presented to the trainees.

Phek: Training on Basic Fire Safety Inspection and Fire Extinguisher Auditing/Handling was held at Bible Hill Colony, Phek. INSP, Sheiya Konyak, giving the welcome speech, spoke about the importance of fire safety and how to handle the situation in case of fire. Basic fire fighting, inspection and audit of fire safety, handling of fire extinguishers, prevention and protection system against fires and forest fires were the topics covered by the trainers.

Peren: During the program held at Jalukie ‘B’ Village Council Hall, resource person, ASI Peren, F&ES, Kedigumlung You talked about the basics of firefighting, inspection and auditing fire safety, handling of fire extinguishers, prevention and protection system against fires and forest fires. Later, a demonstration of different types of fire extinguishers was also presented by F&ES Peren staff.

Zunheboto: Delivering the opening speech on behalf of the district administration at Zunheboto Town Hall, SDO (C) Zunheboto, Athrong said there are two types of disasters – natural and man-made; although disasters are inevitable, he added that one should be aware of basic safety measures and be prepared for dangerous eventualities. The training program is cataloged in two sessions per day covering shopping centers, markets, hotels, churches and all private high-rise buildings (15 meters above) including residential, neighborhoods, settlements, villages, etc

Mokokchung: On the first day of the training at Mokokchung City Hall, training was conducted for representatives of all state and central government departments, including the government. hospitals and banks, followed by representatives from schools, colleges, universities, institutions, private hospitals and retirement homes. On June 21, the training would be attended by members representing shopping malls, markets, hotels, churches and all private high-rise buildings including residential, etc., which would be attended by representatives from wards/settlements , villages and any other stakeholders.