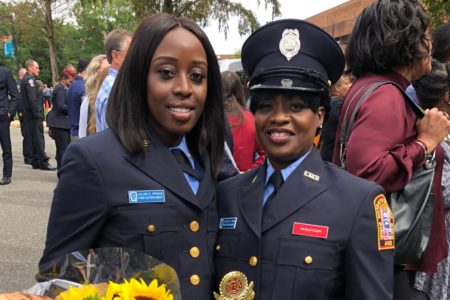 This mother-daughter firefighter team is goals

Jalisa Pinnix didn’t always know she wanted to be a firefighter, but she grew up in awe of her mother, Jacqueline Pinnix and all the stories she would tell her about her work in the emergency medical services industry (EMS ). Therefore, when she found out that there were openings, she went to the local convention center and took the test for the chance to work in an ambulance, just like her mother.

Now the mother and daughter work as firefighters and paramedics.
Jacqueline found her helpfulness and concern for others to be qualities that led her to join the station 18 years ago. Now 50, Jacqueline was promoted and used her knowledge to help her daughter at work.
During the Jalisa academy, five women graduated out of a class of 24.

â€œIt’s still a lot of men. In this fire station, I’m the only woman on the engine some days, â€Jalisa explained. Two recent promotions of black women to fire chiefs are motivating for the Pinnix family. â€œIt’s another motivating thing to know that I can make it to the top,â€ Jalissa shared.

Learn more about this amazing mother-daughter duo below!