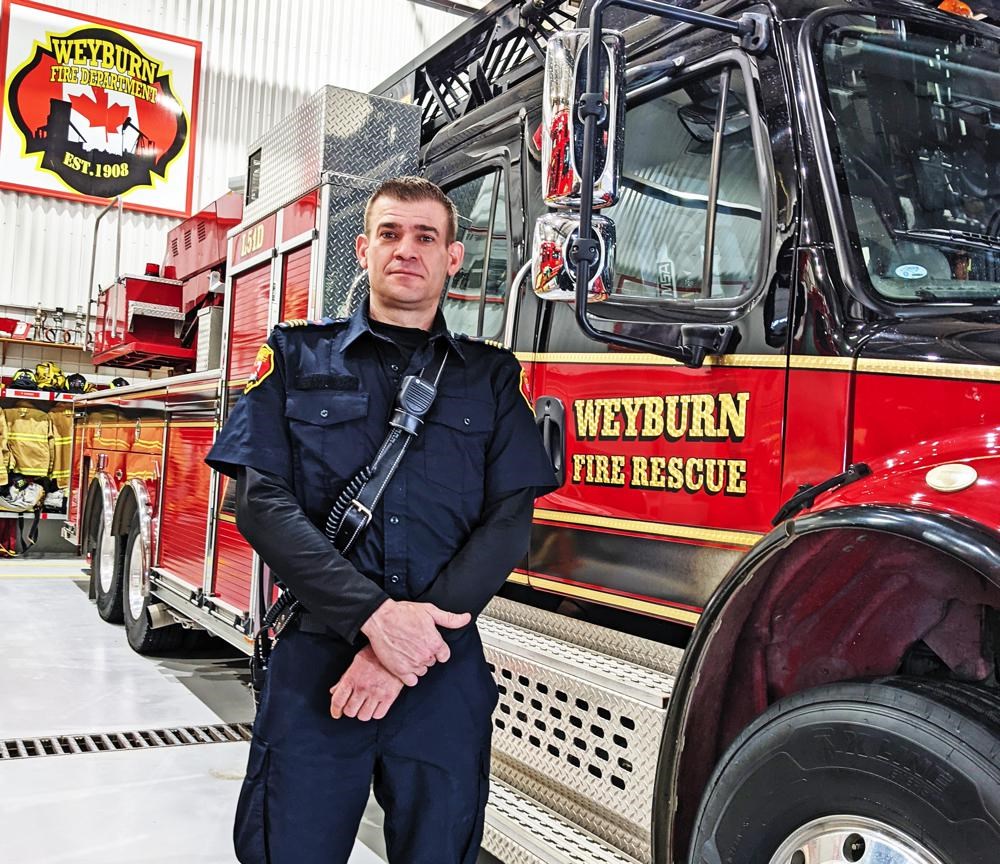 WEYBURN – A veteran of the Carlyle and Saskatoon Fire Departments has brought his experience and love of firefighting to the Weyburn Fire Department as Deputy Chief and Acting Fire Chief.

Trent Lee was born and raised in Newfoundland, in the small community of Petty Harbour, but has lived in Western Canada since arriving in Alberta at the age of 19, and six months later moved to Carlyle to drive a truck for Spearing Service.

His truck driving days came to an end after a tractor-trailer he was driving became entangled in a 100-vehicle pile-up in foggy Ontario.

“I didn’t know how to help. It caused a lot of anxiety and angst, so I quit driving a truck,” he said, noting that he had returned to Carlyle to work at a truck shop. While working there, it was suggested that he join the local fire department as a volunteer in 1999, which he did.

In 2006, he assumed the position of fire chief after working his way up and getting all the training he could at the provincial fire college and in the use of firefighting and rescue equipment.

“For a small rural department, they were very busy for responses in the area,” he said.

Lee remained Carlyle’s fire chief until 2015. As it was not a full-time paid position, he worked in the parts and service department at Merit Ford and then left to work for CanElson Drilling as Health and Safety Supervisor.

CanElson was acquired by Trinidad Drilling in 2015, and a number of employees were laid off, so Lee went to Texas to attend fire school. He redid his qualifications and became a volunteer with the Flint Fire Department, responding to a wide variety of emergency calls.

He then accepted a position with the Saskatoon Fire Department in September 2016 as a fire inspector and fire investigator, and he trained to become a dispatcher.

“I loved doing inspections and investigations, but I missed everything related to firefighting. I missed teamwork, emergency calls and helping others with training to increase their confidence and level of training,” Lee said, noting that he jumped at the chance when a position has opened up in Weyburn as Deputy Chief.

He started Dec. 1 and served in the role for Chief Simon Almond’s last month on the job before he left at the end of 2021, and is now the acting fire chief while the City searches for a new chief.

When asked what he loves most about being a firefighter, Lee said: “I love helping people, not just those who are facing the worst day of their life, but also helping people in the service. with my knowledge base and skills.”

Since accepting the position at Weyburn, Lee has said he has been very impressed with the strength of volunteers, noting: “They are very dedicated. I am absolutely impressed with their level of professionalism and dedication, and am delighted to respond with the firefighters and help them take them to the next level.

Training is a constant need in firefighting, he said, not only to keep up to date with the different types of equipment used, but also the many different ways to fight fires or respond to situations. emergencies, such as road accidents. Firefighters need to know how to rescue people from a late-model vehicle, which will sustain significantly different damage than an older model.

Its aim is to train staff in worst-case scenarios, “so that everything else happens naturally”.

Once firefighters are trained in the most difficult situations, when an emergency response occurs, they automatically know what to do and react accordingly. Weyburn FD have received a steady stream of calls since they started, he noted.

Among the things a firefighter needs to know are the differences in how structures are damaged in a fire. For example, a fire in an “old house”, or a fairly old house, will take time to spread, while a newer house will see a fire spread very quickly, and there is the risk of the house s collapses on itself once the fire has been extinguished.

“The fires are burning hotter and faster than they ever have,” he noted.

He also hopes the fire department can resume inspecting business premises, as it is a valuable preventative measure to help ensure a business stays safe from fires and damage that can result from a fire. Many inspections cannot be done currently due to restrictions imposed by the COVID pandemic.

“The more we can do to prevent a fire from happening, the better,” Lee said. “I have investigated so many easily preventable fires. This is our goal, that people are happy and healthy and that they stay safe while they live and work.