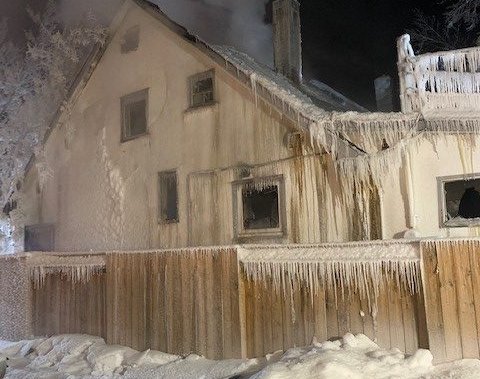 The Saskatoon Fire Department responded to a structural fire in the 400 block of R Avenue South on New Years Eve.

Saskatoon police on patrol reported the structure fire at 9:21 p.m., a statement said.

Firefighters were dispatched to the scene and reported that the structure was fully involved.

An exterior fire attack was initiated on arrival with limited entry into the structure due to the scale of the fire and the hazardous conditions.

Neighboring houses were at risk of catching fire, so firefighters were assigned to protect them.

Part of the structure involved in the fire had to be dismantled with a shovel at 3:19 a.m.

According to the statement, there was an immediate risk of a wall falling due to a loss of structural strength combined with the weight of the water freezing on it.

Temperatures in the city dropped to -49 Â° C with the wind chill around midnight.

The dismantling of part of the building also helped firefighters extinguish a fire area that was inaccessible from the outside.

A resident who is believed to have lived in the house has not been located during the fire and Saskatoon police are following up.

SaskEnergy and Saskatoon Light and Power have been advised to shut down services for safety reasons.

City of Saskatoon trucks were also on hand to spread sand on the streets and sidewalks due to the freezing conditions created by the water used to fight the blaze.

Police maintained traffic control and ambulance service was on standby.

Initially, three fire engines, a ladder truck and a rescue unit as well as the battalion commander and an investigator were dispatched to the scene.

Firefighters on leave were called in to operate standby fire trucks to ensure adequate resources were maintained.

Throughout the blaze, 10 additional fire teams were moved to the scene of the blaze to avoid exposure to the cold and provide relief.

The fire investigator was unable to conduct an examination of the causes and places of origin. Damage to the structure is estimated at $ 150,000.

The area around the structure has been fenced off and a closure notice placed on the property by the fire department.

A repair order will be issued by the fire investigator to ensure that a complete demolition of the structure takes place as soon as possible.

The fire did not injure firefighters.

Saskatoon fire crews responded to a total of 36 incidents during their 14 hour shift, with this fire being one incident.

Firefighters left the scene shortly before 8 a.m. on Saturday.