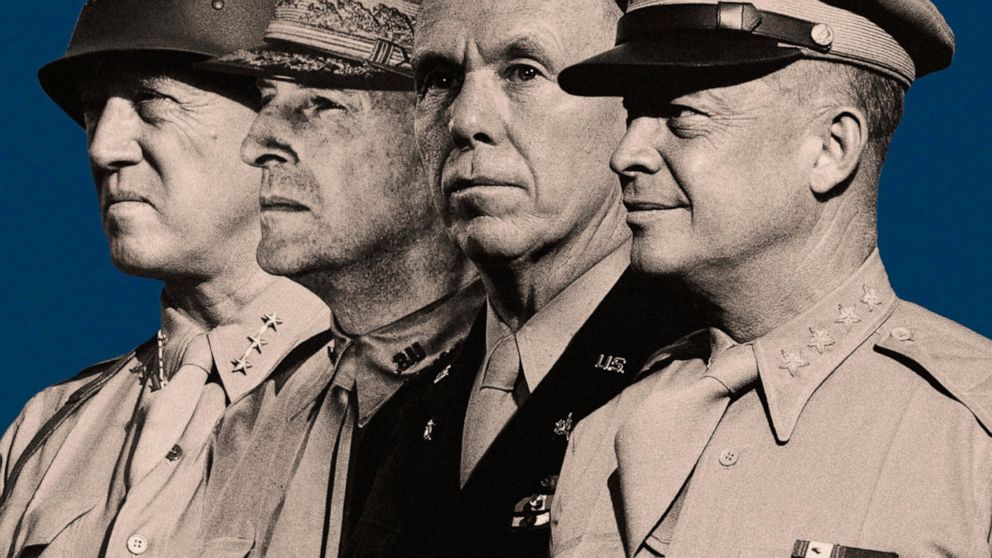 Insightful and informative, military historian Robert L. O’Connell’s latest book bears a title that might evoke in today’s readers a group of superheroes determined to save the free world – in this case, four army generals transforming the United States into a global peacekeeper.

O’Connell prefers to present them as a military “row of assassins”, an analogy to 1920s baseball for a formidable talent that his subjects would no doubt have appreciated. But these four men — George S. Patton, Douglas MacArthur, George C. Marshall, and Dwight D. Eisenhower — had powers far beyond mere mortals wielding Yankee pinstripe bats.

There was Patton’s boldness on the battlefield, MacArthur’s ego and luck, Marshall’s organizational genius, and Eisenhower’s persuasive personality – even back then, everyone loved Ike. They also shared the ability to think strategically, not to mention the traits of diligence, intelligence, and ambition, as the world teetered under the threat of totalitarianism.

America at the turn of the 20th century defines the quartet’s origin stories. Eisenhower was a Kansas boy of modest means who viewed the US Military Academy as a “free college”. Patton was a wealthy kid who started out at the Virginia Military Institute and then landed a coveted spot at West Point. Marshall graduated from VMI, then personally lobbied President William McKinley for a commission. The biggest challenge MacArthur faced: living up to his father’s reputation as a Civil War hero. Amazingly, he exceeded all expectations in style, going from mama’s boy to golden boy.

Most interesting is how their paths converged as they slipped into the orbits of the leaders of their formative period. For example, the commander of the United States forces during World War I, General John J. “Black Jack” Pershing, was at various times Marshall’s mentor, Patton’s sister’s suitor, and later a rival of the MacArthur’s first wife.

The Great War was a launching pad for America’s prominence and O’Connell’s subjects. While the youngest, Eisenhower, remained in the United States to train new recruits, Marshall distinguished himself “over there” for his talent for logistics. Nearly killed in action, Patton realized that tanks would replace cavalry. The star of the Western Front quartet was MacArthur, winner of seven Silver Stars.

O’Connell details the relentless networking needed to advance in a demobilizing army and the reflection on the lessons learned from the first real “industrial war”. As weapons became more lethal and delivery systems developed by land, sea and air, the meat grinder in the trenches morphed into mobile warfare in the late 1930s. O’Connell shows how Team America came to understand the implications of “total war” as participants in World War I, prophets in peacetime, and then the best practitioners of World War II.

The highlight of “Team America” ​​can’t help but be the action-packed, oft-told stories of that leadership – in state councils and the terrors of battle – and the importance of the impact of each general. However, their phenomenal effort, skill, and teamwork with the Allies were ultimately eclipsed by the march of technology toward a bomb so destructive it ended a world war and made future global conflicts unthinkable.

Less exciting but more intriguing is the post-war era for O’Connell’s team. His subjects have come to embody the contradictions that litter history. Patton, almost disturbed by his penchant for battle, fortunately died after a traffic accident in occupied Germany. Marshall, who led the Manhattan Project, won the Nobel Peace Prize for his plan to rebuild Europe. MacArthur, the undisputed ruler of occupied Japan, offered democracy to his defeated enemies. Eisenhower became the two-term president who warned America about the “military-industrial complex” he helped create.

“Team America” ​​combines gripping biographies of our heroes as they rise to the heights of military and then civilian leadership over five pivotal decades. O’Connell also discusses why industrial warfare became a juggernaut and how they managed to control it to achieve an uncertain peace that still holds.

Douglass K. Daniel is the author of “Anne Bancroft: A Life” (University Press of Kentucky).