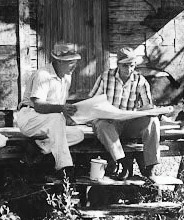 The island’s first developer Phil Kinsey, left, in a 1962 photo from the University Archives and Special Collections. COURTESY PHOTO

Like most people who grew up in Southwest Florida, Hailey Kerr, a senior at Florida Gulf Coast University, occasionally dug her toes into the sugary sand of local islands like Sanibel. Today, thanks to a research project involving students, professors and community members, she delves into the history of an island formed 100 years ago by a powerful hurricane.

Through an internship, Ms. Kerr is collaborating with other students of Rowan Steineker, Assistant Professor of History, to compile a digital archive preserving the history of Upper Captiva Island. Until 1921 it was part of Captiva Island. That year, an unnamed storm opened a new channel through Captiva, creating a separate, bridgeless landmass that was named Upper Captiva. Although only accessible by sea or air, the development that began in the 1980s has attracted adventurous year-round residents, holiday renters seeking unbeaten trails, and hungry boaters docking in the harbor restaurants.

Ms. Kerr has yet to set foot on the shores of the barrier island. But scanning historic photos and other documents and listening to the oral histories of islanders has done more than hone resume skills. 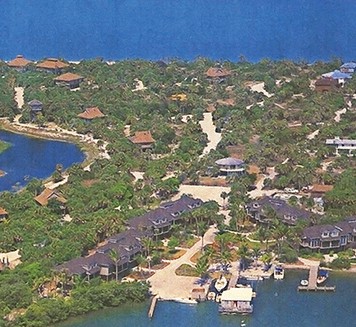 “I’ve also become much more interested in local history since I joined the project,” says Ms. Kerr, who double majors in history and criminal justice. “What I’ve learned is that Upper Captiva is very community driven and has been for most of its history – very interested in not only preserving history but also the environment of the island. I’m really glad I learned more about it and local history in general.”

This is a victory for FGCU’s efforts to engage students in the local community and provide them with hands-on research opportunities, boosting graduate study prospects and career potential.

The islands of Lee County are home to a colorful and sometimes violent past. Members of the Calusa tribe and later Spanish conquistadors paddled to their shores hundreds of years before snowbirds and pleasure-seeking vacationers “discovered” them. Local lore has long conjured up images of pirates holding captives on island outposts – hence the name Captiva. Hurricanes have also dramatically shaped and reshaped the islands over time. The 100th anniversary of Upper Captiva’s brutal birth prompted members of the island community to contact the FGCU History Department in 2021.

Mr. Steineker and Associate Professor Frances Davey quickly involved their students in recording oral histories, digitizing and compiling metadata for important documents and photos, and creating a timeline that will be part of a collection housed in the FGCU Archives and Special Collections.

“It was a great opportunity to engage our students in hands-on public history work and to work with the community to help them document and preserve their history,” he says. “There was a strong interest from community members to further research the story. Many of the islanders who had been there in critical phases were aging or moving away, and they wanted to be sure their stories were collected and preserved.

Their efforts will help build a narrative for Upper Captiva that adds a colorful chapter to regional history, she says. Major turning points include infrastructure construction, real estate development, and conservation efforts. Outside the realm of human intervention are the impacts of natural disasters like Hurricane Charley of 2004, a Category 4 storm that blew through the island, ripping through homes and neighboring mangrove islands.

Only a handful of rustic homes clung to the lush island paradise before development began in the early 1980s. The state had purchased about three-quarters of the island for preservation by the late 1970s, and the cost of building materials per barge to the remote site further limited development.

Today, there are 362 homes — mostly vacation rentals, according to Bill Byrnes, chairman of the Upper Captiva Fire and Rescue Services Board. It was a retired firefighter from the island who contacted the FGCU and sparked the collaboration. The Lee County Electric Cooperative sank the first undersea power lines to the island since Captiva in 1983, he says, the same year the Safety Harbor Club began building a condo community. Utilities and housing estates paved the way for million-dollar multi-story stilt houses, but no roads.

Besides collecting shells, fishing and sunbathing, the island’s restaurants provide diversion amid the isolation. One of the first, Barnacle Phil’s, arrived in the early 1980s when pioneering developer Phil Kinsey converted a cottage into a harborside seafood shack that became famous for black beans and yellow rice from his wife. The Florida native and veteran pilot was inspired to buy property in the early 1960s after flying over the island in his private plane.

This is just one of the stories woven into the tapestry of Upper Captiva history. Preserving this past before it is lost means a lot to islanders, says Byrnes.

“We are very grateful to the teachers and the students,” he says. “They are very excited to do something that no one has ever done before, to tell the story of Upper Captiva. It is something to be very proud of. » ¦