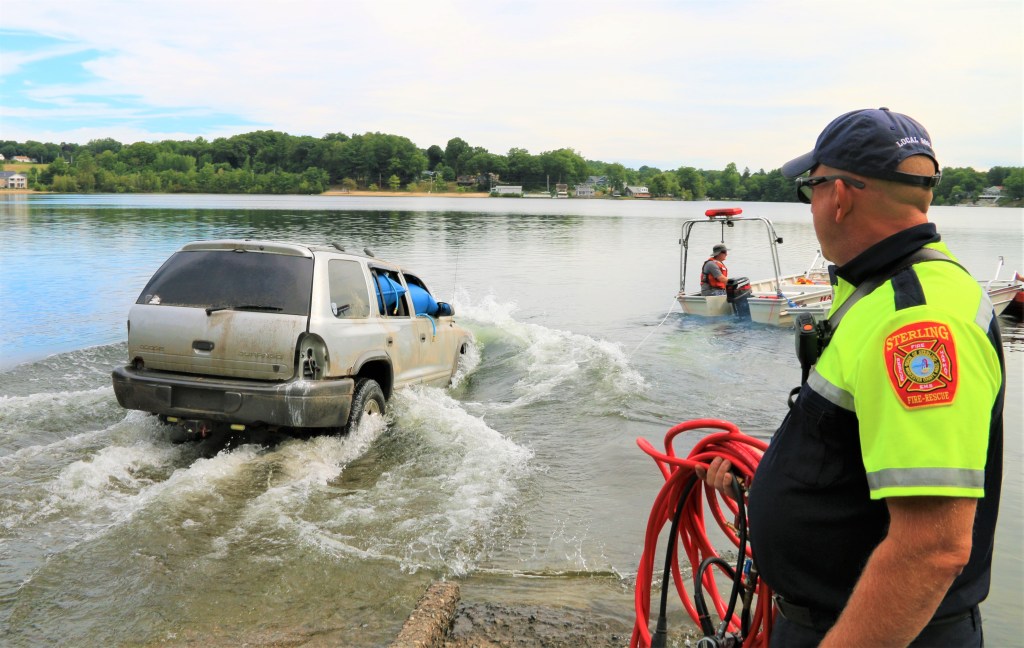 LEOMINSTER — It was a scene from an action movie Thursday as firefighters across the region donned high-tech waterproof gear and scuba tanks to practice rescuing a submerged vehicle as part of the formation of the District 8 Regional Dive Team.

The dive team is led by Lunenburg Fire Chief Pat Sullivan, who was in training, and is part of a branch of the District 8 Technical Rescue Team, which covers all of Worcester County.

Sideleau said they go “as far west as Petersham” and cover the Harvard and West Boylston area as well as Fitchburg, Leominster, Townsend and more.

“It’s really organized and very important because there seems to be more outdoor recreation and more traffic near waterways with development near water,” he said, adding that they are funded by the Homeland Security Council.

The Leominster ET Cote Auto Exchange firm donated a battered 2002 Dodge Durango for the drills and removed the fuel tank and drained all the fluid ‘to make it safe for the environment,’ said crew chief Rob Nickerson, a Holden and Sterling firefighter who took command on the water.

Firefighters checked scuba gear before donning drysuits and face masks that keep them ‘fully encapsulated’. The masks are equipped with diving lights, communication equipment and a GoPro camera in a waterproof case, which was used to record the training.

“It’s great if we’re doing any kind of diving where there might be a criminal problem,” Nickerson said of the camera. “We always assume criminal, unless it’s a child falling through the ice, and it would all become evidence that we turn over to the state police.”

The water level in the lake is currently very low due to drought conditions, about 17 feet at the deepest according to Nickerson.

They inflated two large blue airbags, each rated at 2,000 pounds. or a ton, inside the vehicle after putting it in neutral and pushing it up the Leominster boat ramp and into the water. It was then towed into the middle of the large 103-acre pond by lines attached to two flat-bottomed aluminum lifeboats from the Harvard and Rutland Fire Departments and they released the airbags to sink it.

“Here she is,” Nickerson said as the Durango slid under the water.

Six divers then took turns working on the platforms attached to the boats anchored near the submerged vehicle. Fitchburg Fire Department Captain Jack Gilmartin was a senior diver for 25 years and recently retired six months ago.

“We work together as a unified group, and we all work very well together,” he said.

Gilmartin was parked in one of two red rigid inflatable boats with Fitchburg firefighter Chris Klein while Nickerson was in the other calling for instructions.

“Rutland and Harvard are you ready? Are your lines free? Nickerson said before the two airbags appeared on the surface of the water.

“Both airbags are out and the vehicle is on the bottom,” he radioed the crew on shore.

Nickerson shuttled between divers and off shore and retrieved additional oxygen tanks and other equipment as needed, while keeping a watchful eye on the sonar display attached to his boat. He said that while Sterling is currently the only fire department with a side-scan sonar system, it is in the process of getting one for Fitchburg and Harvard.

The sonar measured the depth of the water, which fluctuated between 14.2 and 17.6 feet deep, and Nickerson highlighted the outline of the vehicle visible on the screen.

“The back is up, it’s sunk into the dirt,” he said. “If this was a real incident, we would deploy this boat and get a side scan sonar view from two different angles and mark it in two different directions and then determine if it was a boat. or an operation ashore.”

Sullivan radioed that they could clearly see the vehicle from the drone capturing aerial footage, saying “visibility is better than we expected”, and Nickerson replied, “vegetation is keeping the silt up”.

Nickerson said they always have a primary and secondary diver and “one 90%” someone ready to use all the equipment who steps in if any of the other divers run into trouble. He said that in cases like “the operation stops if we have to save a diver”.

Divers have a main oxygen tank strapped to their back with “a pony bottle, fully redundant backup air system that they can easily switch to,” Nickerson said, adding that they also have a mask. backup and that the backup system is in use. “only for emergencies.”

“They have all undergone extensive training with Dive Rescue International and are all trained to the same standards,” he said of the team members. “They all know what’s going to happen.”

Divers start with 3,000 pounds of air in their main oxygen tank and once it drops to 1,000 pounds, Nickerson said they’ll “pull them up and drop another diver.” A scribe positioned on the boat checks the divers’ air pressure every five minutes and notes how long they have been underwater.

The tender also has an important job as he is in constant communication with the divers and can talk to them through ropes attached to them which have communication threads woven into them. The tender relays communication from divers to other boats, telling them specifically which lines to pull and when to release the tension on them.

Nickerson said they have a 90-minute window before a mission “goes from rescue to recovery”, noting a rescue in Alberta, Canada, where the victim was underwater during that time and s surprisingly fully recovered.

“They got out of the hospital,” he said, before explaining that the water there is among the “cleanest and coldest” and that there are many things that can affect whether someone whether or not one is drowning, including water temperature, water quality and type, such as whether it is “dirty”, fresh or ocean water, and “the a person’s state of health.

He said many of the dive team members are also certified in ice rescue and also train in the winter. They receive specialized training through the Massachusetts Firefighting Academy and are trained in repelling, confined space, swift water rescue, and heavy animal rescue, among other categories.

Firefighters and chiefs from Barre, Clinton, Fitchburg, Gardner, Harvard, Leominster, Lunenburg, Rutland and Sterling were on hand for the training.

Although the practice revolutions at Whalom Lake took longer than expected due to the entire front end of the vehicle becoming lodged in several feet of mud on the bottom of the lake and the trunk failing to locked to keep the airbags on, this allowed the whole crew to discuss different scenarios, brainstorm ideas and try out various tactics to free him before towing him back to shore, much like the challenges ahead in actual rescues.

“I’ve never been on a dive where things have gone well, there’s always a problem,” Nickerson said. “Working during training helps them prepare for the unknown and uncertainties.”

2022-08-14
Previous Post: Mayking Fire Department in Letcher County offers free showers and laundry services
Next Post: Everyone says the same thing about firefighters helping ‘a person out of a sticky situation’ with lube and broken handcuffs