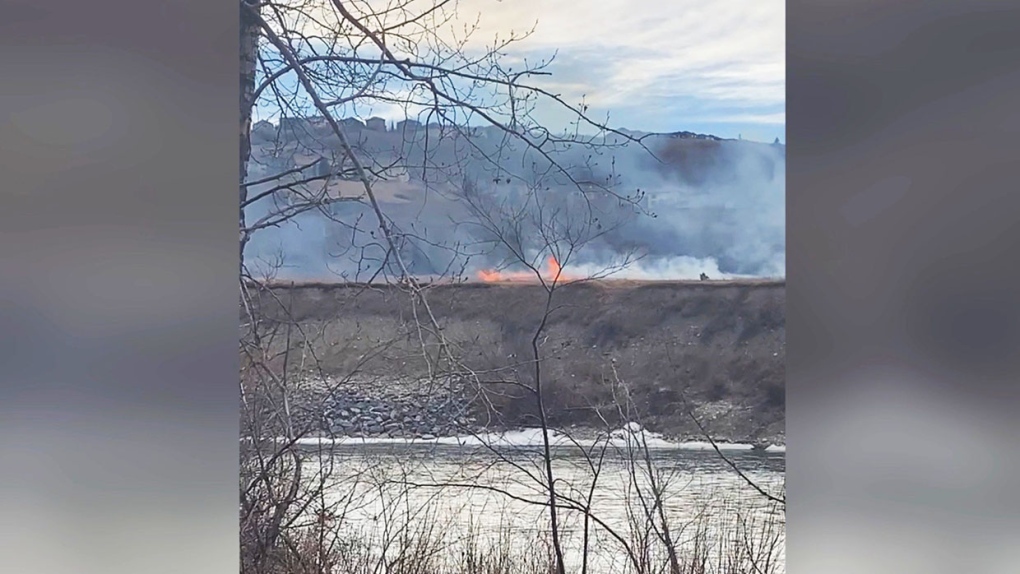 Questions are being raised about the cause of a grass fire near Edworthy Park on Tuesday that ignited near train tracks after witnesses saw a train passing.

The Calgary Fire Department (CFD) was called to a grassy, ​​wooded area near the CP train tracks west of Edworthy Park before 5:00 p.m. that afternoon, initially believing there was had several grass fire sites, but crews learned that winds were fanning the flames. create a large grass fire.

Hudson Grace sent CTV News a video of flames and smoke spreading across the ground – it was taken from Shouldice Park with a view across a clearing across the Bow River to the southwest.

Grace said she saw a train pass around 4:40 p.m. Tuesday afternoon just before the fire started.

No injuries or material damage were reported.

The fire department said Calgary’s hot, dry weather over the past few weeks has increased the risk of fires starting near CP tracks.

“When it’s dry like that and it hasn’t greened up yet and you have all these dried grasses, leaves that can ignite very easily in the right conditions. Then when you have windy conditions we regularly encountered here in Calgary, (grass fires) can spread very quickly and create a dangerous situation for communities,” said Carol Henke, Public Information Officer for the Calgary Fire Department.

Henke did not confirm the train was the cause of the grass fire as the investigation is ongoing, and all witnesses are asked to send videos or images to assist fire investigators.

In a statement to CTV News, spokesman Salem Woodrow said, “CP was alerted to a fire along its right-of-way at approximately 5 p.m. on April 5. CP appreciated the quick action of the Calgary Fire Department. The incident is still under investigation.

Train wheels can cause sparks when rolling over the tracks, which can cause forest fires.

“If we were to look at patterns over time, we might not see this particular event related to climate change, we might see the relevant range and length of season,” said Gwen O’Sullivan, professor of earth sciences at Mount Royal University.

O’Sullivan also works in the field of wildfire forensics in Calgary and throughout Alberta, and says the causes of wildfires are related to the conditions that are conducive to a fire.

“(Grassland fires and forest fires) generally require dry materials, an oxygen supply and an ignition source. Depending on when these are available or not and in which case , we’ve had such low moisture in the ground on the ground for a few weeks now, those kinds of conditions are conducive to fires like this.”

She said investigators are likely looking for evidence of activity that causes a spark and that it will match other findings, including time frames and burning patterns.

“We really haven’t had that much snow and precipitation,” said Debbie Black.

“It’s drier than usual, but it doesn’t surprise me that we had a grass fire. I’m actually surprised we haven’t had more,” Kevin Watson said.