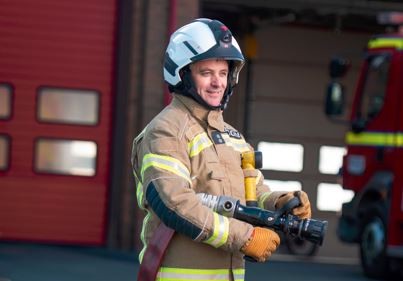 “Like a rugby team, there is a place for everyone in the fire department”

Rugby fanatic Nick Mason draws a number of comparisons between his favorite sport and being an on-call firefighter with Oxfordshire County Council’s Fire and Rescue Service, busting some misconceptions along the way .

Nick, who was a scrum-half for Witney Rugby Club for 14 years, said:

“Like in a rugby team, there is a place for everyone in the fire and rescue services; from the portly to the lean sprinter, the slow and the tall.

When speaking to potential new recruits, Nick also describes the fire truck as “a huge toolbox on wheels”, reflecting the variety of incidents he and his colleagues witness. The vehicle is equipped to deal with all circumstances such as structural fires, traffic collisions, water rescues and hazmat incidents.

What Nick is saying is that in today’s fire service, the diversity of incidents and roles means there is no one-size-fits-all solution. At 59, he is also keen to stress that age is no barrier to joining the Oxfordshire team either.

Nick explains: “I remember someone said to me, you’ll know when you grow up; the police and fire department will all look younger than you. This is not the fire and rescue service of today, I am a good example. I want us to recruit more seniors, women and residents from minority ethnic groups. The modern fire service should and should be diverse, reflecting multicultural Oxfordshire.

This Woodstock-based firefighter opens the door for many people who may have considered applying to join the service but thought age and lack of fitness would work against them.

Much more than putting out fires

“Come and find out if you have what it takes,” enthuses Nick. “If you don’t try, you don’t know. Any new recruit will receive first-class physical training and because today’s fire service is about more than putting out fires and witnessing major incidents, intellect is just as important as skill. strength.

In fact, Nick enjoys interacting with local communities by organizing road safety events, visits to local schools, safe and well at home tours – installing smoke detectors – and at the furthest end light but equally important of scale, participating in charity fundraisers like car washes to benefit the firefighters charity.

“We tend to have a topic for each month of the year to deliver a seasonal safety message to the public,” says Nick. “My fire station is also prolific in fundraising for children in need.

“If you’re a people person, you’ll fit in well.”

Difficult sides of the role

He acknowledges that there are difficult aspects to this role, such as attending to serious injury incidents, but the fire service has evolved to protect and support its crews through difficult times.

“We always carry out detailed debriefings after an incident, ensuring that any crew member who has witnessed difficult incidents receives the necessary assistance if needed. Fortunately, these tragic events are rare, which I hope in some cases is due to our interaction with communities through our fire and road safety education initiatives.

Nick continued: “Children used to get their heads stuck between metal gratings, but today’s kids are too busy on their computers to cause such mischief! I do have a selection of animal rescue stories though.

“There was the hostess who loved her cat more than her tree. When, after many hours, I had to explain that the only way to get her feline back from the highest branch was to cut down her precious tree, she agreed!

“Then when there was a call to rescue a boy stuck in a door, it turned out to be a Labrador. Boy. Lab. It’s amazing how a cracked line can cloud expectations of what we’re going to find. I can assure you that whether it’s an animal or a human, we treat every incident seriously, and I’m glad we got the pooch out quickly. .

“I am a proud grandfather to my seven month old Logan. Family matters sit alongside all that is special about being a member of the Oxfordshire County Council Fire and Rescue Service.

“My new family member made me think of another reason why we want more older residents to join the service. Our young recruits are stars but we often lose them too quickly. When they start, they may live at home, but then leave the area to find their own place or pursue their career dreams. on-call firefighters are only part-time.

“The further you go in life, often the more you settle. Your career outside of the fire department sets, you have less time to go until the mortgage is paid off. You are settled with your fate in life, looking for extra commitment to play a role in your local community.

“I guess my message is you’re never too old to be considered. Simple, if you hesitate to join the fire department, contact us. »

For more information on how to become a firefighter on call and other employment opportunities with Oxfordshire County Council Fire and Rescue Service visit Oxfordshire.gov.uk/oncallfirefighters or email [email protected]

Click on Register to hear from us and receive the latest news and updates in our bi-monthly newsletter, Your Oxfordshire.