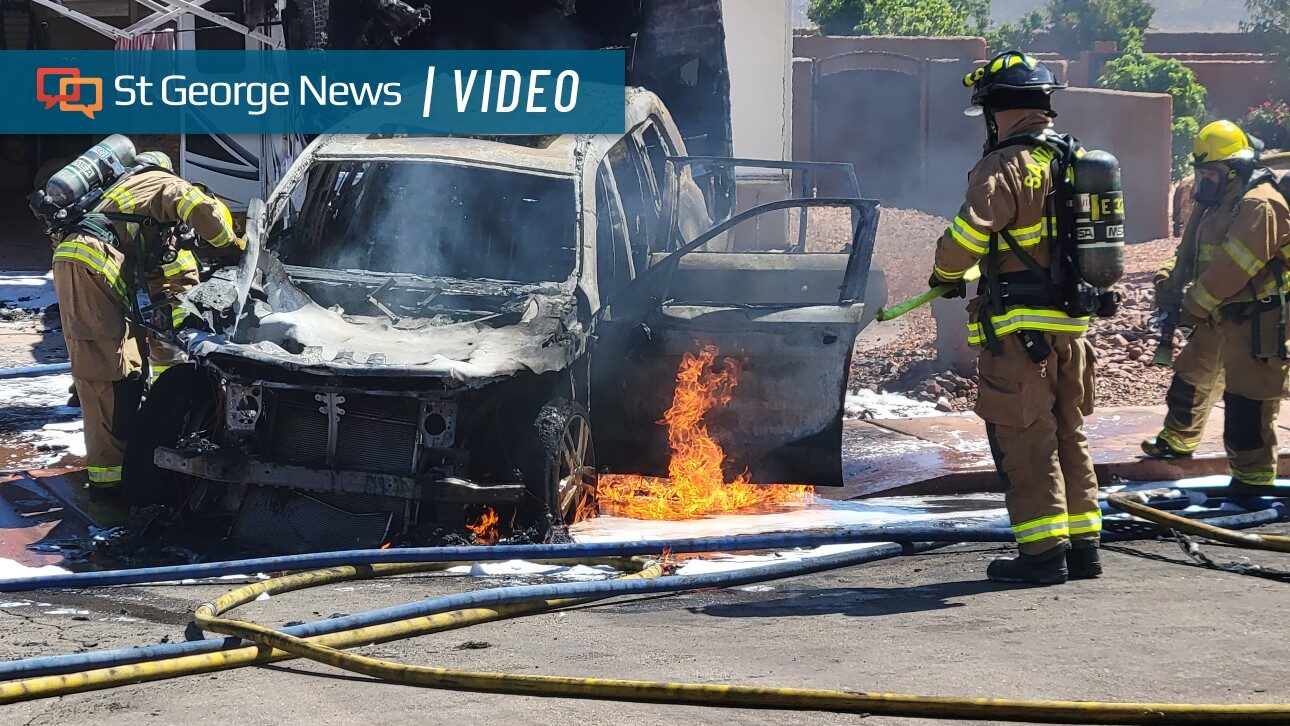 IVINS — A public hearing at Ivins City Council on its fiscal year 2023 budget Thursday night turned into the council considering a “divorce” with Santa Clara over the two towns’ joint fire department. During the same discussion, a group of residents also called for more funds to be transferred to new pickleball courts in the city.

The two cities merged their fire departments at the beginning of 2018. At the time, officials said the move was intended to pool staff and resources and provide better service to the two cities’ growing populations.

But during the budget discussion at Thursday night’s council meeting, residents, council members and the mayor said Ivins was wronged in the firefighters’ marriage.

The main source of contention was the department’s decision late last year to no longer operate fire stations within the city limits of Ivins.

“One of the main concerns is that the plans don’t show the investment here like they do expanding in Santa Clara and to me that’s grounds for divorce. Our people deserve better than that,” said the Ivins Mayor Chris Hart at the meeting, although he warned that a little couples counseling could be better than a complete breakup. “We’re trying to keep this together. There would be a budget impact important if we broke up.

Under the agreement that merged the two cities’ fire and police forces, Santa Clara oversees the fire department/emergency medical services and makes most of the final decisions on how it is run and budgeted with Ivins contributing money and resources. The reverse is true on the police side, with Ivins holding most of the operational reins.

Ivins Station contains fire trucks and equipment, as well as the office of the Santa Clara-Ivins Fire Chief. Otherwise, there are generally no firefighters on Center Street, and any fire or EMS calls to Ivins are answered from both Santa Clara stations.

The discussion regarding the fire department began at the public hearing for the provisional budget for the financial year 2023. Resident Becky Warren asked why the budget did not include funds for a new fire station in Ivins and the additional fire response times – especially in West Ivins – are not adequate .

“I am convinced that we have to deal with the absence of a fire station,” Warren told the council. “The need is now.”

Council member Jenny Johnson, who called the fire department her “passion,” said she had similar concerns with Warren. She said earlier Thursday there was a fire at 300 South and Main Street and her daughter called her for seeing black smoke.

“During the time it took me to walk there, there was still no fire truck and when they arrived it was two firefighters,” Johnson said, adding that since the two towns merged the two departments, Ivins didn’t get the best shot. for their money.

“Our contribution has doubled or tripled over the past three years. Is it really beneficial for our community? Services have declined significantly.

When St. George News reached out to Santa Clara Mayor Rick Rosenberg for a response to accusations that the merger resulted in reduced fire departments for Ivins, he said he wanted to investigate further and planned to contact his counterpart Hart to discuss the situation. .

“Not until I had a chance to read the minutes of the meeting and understand what was actually said,” Rosenberg said.

During her comments to the council, Warren noted that she knows neighbors who have lost their fire insurance due to the lack of a nearby station. “It’s happening to our residents and I find it unacceptable,” Warren said.

“I had a neighbor who tried to switch insurance and was told, ‘You would lose your fire insurance,'” Murphy said. “It depends on the insurance company. I changed mine and there was no problem.

Ivins City Manager Dale Coulam said while Santa Clara could do more to make sure at least the Center Street station was busy, it wasn’t entirely to blame for the lack of a new station.

“Under the joint agreement, the stations are the responsibility of each city,” Coulam said. “A new station may be under our responsibility.”

That said, council member Mike Scott said while a new station is ultimately needed, particularly on the west side of town, the lack of on-call firefighters at the station one block from the hotel town of Ivins is the most pressing problem.

“Without Center Street, we don’t have five-minute coverage of all of Ivins. We have some sort of emergency with a fire,” Scott said. “We are a Santa Clara customer but an unhappy customer. At present we have a fire station in perfect condition, but it is of no use. »

Residents said having more should be a priority in the budget. “We have 10 people here and what does that tell you?” one said.

However, Hart said the biggest problem is finding a place for the courts that doesn’t involve taking away the leisure options used by others. Saying that each tribunal would cost the city about $40,000, he added that there were other priorities that also prevailed.

“It requires land that we don’t have. What we need to do is keep our streets safe and everything working. I wish I had more pickleball courts. We heard you,” the mayor said. “Let these 400 people provide us with land and damn it, we’ll build a pickleball court.”

However, shunning the older demographics of many pickleball players as well as city dwellers, many won’t be able to wait for years of building new parks that could accommodate more pickleball courts.

“Some of us want the fun today, not 10 years from now,” Anderson said. “We just have to find a way to pay for it.”

Johnson noted that emphasizing pickleball in all city parks might not look good in the long run.

“While I’m not opposed to pickleball courts, my concern is that pretty word ‘fashion,'” Johnson said. “What is popular now may not be popular later. We have other things that the city doesn’t have enough of. People can come up to us and say we need more frisbee golf. Are we going to end up with 50 pickleball courts and have to find new uses later? »

Afterward, Johnson, noting that she might have irritated pickleball supporters, joked that her email address was the same as board member Anderson’s.

Council member Dennis Mehr said it shouldn’t be one sport against another.

A local landlord who intended to turn her large single-family lot into one with several affordable townhouses rejected in january returned Thursday evening with a new preliminary plan.

After working with neighbors, Sally Jensen’s Vista development at 145 W. 100 South now has fewer homes but is both meeting support from most neighbors and also meeting council approval in a vote unanimous 5-0.

“The contestant wanted to work with her neighbors and she did,” Scott says.

Chris Reed is weekend editor and reporter for St. George News. He gradually moved east after growing up among the Valley Girls of the San Fernando Valley in Southern California. He graduated from Cal State Northridge before spending a decade in Las Vegas. As a sportswriter and editor, he’s compared shoe sizes with Shaq before. As a journalist and editor, he covered parades, triumphs and tragedies. He also got closer to the stars by advertising for a space module builder. He came to St. George out of love and learned to love the community. He is the proud father of two boys, his youngest being a champion against autism and type 1 diabetes.