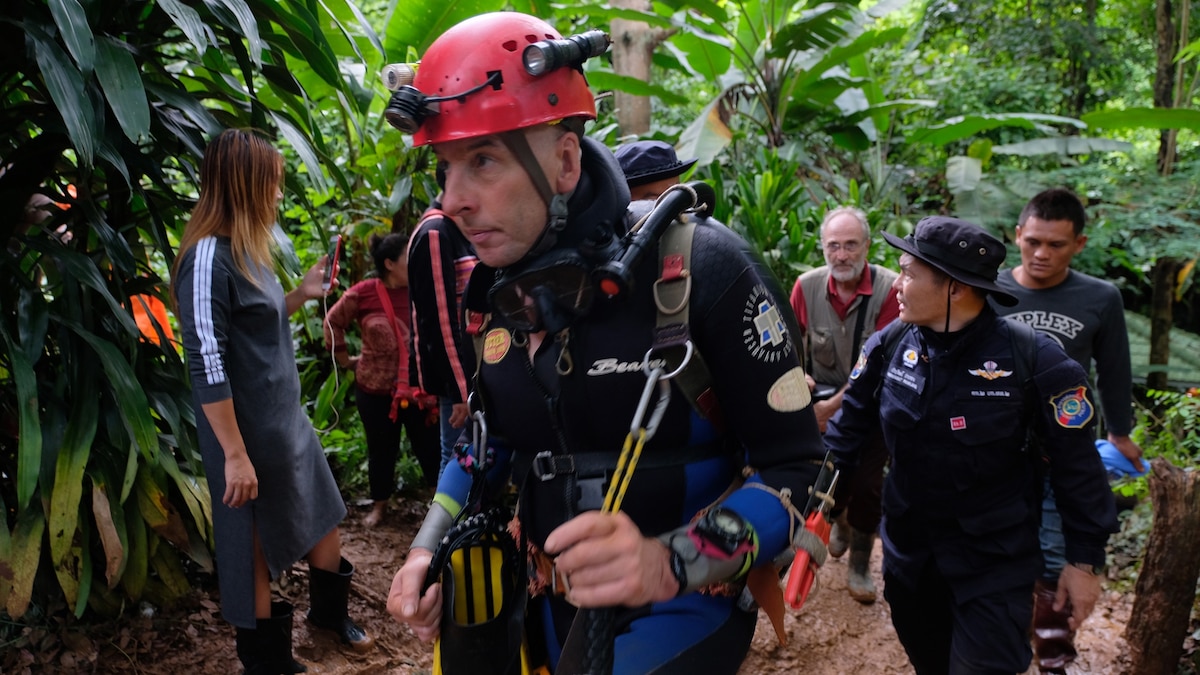 Inside the risky cave dive that saved a Thai football team

In 2018, when 12 members of a men’s soccer team and their coach were trapped by rising floodwaters deep in Thailand’s Tham Luang cave system, an expatriate British caver handed Thai authorities a note with three names on it: Rick Stanton, Rob Harper, and John Volanthen.

“They are the best cave divers in the world,” the note read. “Please contact them… Time is running out.”

Within 24 hours the men were on the scene and within days they were plotting a daring rescue beyond the capability of even the world’s elite military teams. Over the next two weeks, the world watched, mesmerized by live television feeds, as Stanton, the leader of a dozen cave diving enthusiasts, worked with the Thai government and hundreds of many countries to bring the boys and their coaches out alive.

Stanton, a 60-year-old retired British firefighter, was a central character in the National Geographic documentary, The rescuestreaming on Disney+ and made by the team behind the Oscar-winning climbing documentary Free Solo. (He is also portrayed by Viggo Mortensen in an upcoming Ron Howard feature.)

He has now written a stunning autobiography titled Aquanaut: The Inside Story of the Thai Cave Rescue. He spoke to National geographic about his love of caving, the daring plan to save the boys, and how his life was changed by this extraordinary rescue.

Joel K. Bourne Jr.: Something about moving water seems to have appealed to you from an early age.

Rick Stanton: I have always been fascinated by water. I was a good swimmer. I grew up in the 60s and early 70s when all those Jacques Cousteau shows were on TV. I spent my life in boots [rubber boots]. It’s what you wear when you fish, it’s what you wear in the fire department and it’s what British cavers wear. Even my birth sign is a Pisces, if you believe it.

JB: Your first introduction to caving dates back to 1979, when you watched a documentary called The underground Eiger. It followed three young explorers as they completed a world-record cave dive in Yorkshire. What about that movie that ignited your passion for the sport?

RS: It just focused my thinking. I knew mountaineering. But it seemed much more adventurous—underground then submarine. It combined all the elements into one package that really, really got to me.

JB: It seems like once you joined the caving club in college, you found your tribe.

RS: It was exactly that. I found my tribe, and some of them are really, really, really good friends. Due to the nature of caving, you have to rely on others. Thus, it forms strong bonds. Forty-two years after going to college, six or seven of us were all together the weekend the boys went to the cave.

Thank you for respecting copyrights. Unauthorized use is prohibited.

JB: For many people, exploring a flooded cave in the dark feels like an absolute nightmare. How did that amuse you?

RS: Do you know the concept of flow, the state of mind where you are totally in the moment? I think when you’re cave diving you get a bit of sensory deprivation because your vision is limited and all you hear are bubbles, which sounds like white noise, and there’s not much else, really.

JB: In The rescueone of the team members says it’s like floating in space.

RS: And how fantastic is it? Have you ever dreamed of flying? Well, if you’re cave diving, that’s how it is, you know. You cross in three dimensions. If you see a hole in the ceiling, you can fly up to it. It’s like flying in a wingsuit, but in ultra-slow motion.

JB: Even before you were called to Thailand to help save the boys, you had made several rescues from trapped cavers, as well as many gruesome recoveries, even having to recover the body of one of your best friends.

RS: No one else is going to get a caver apart from another caver. There is no professional rescue service, certainly not in Britain…you need people with experience in underground rescue and diving.

JB: Why couldn’t all those special forces groups around the world come up with the plan that worked, and a few middle-aged cavers in the UK could?

RS: One was our huge experience in the caves and of course knowing that no matter how badly the boys wanted to dive without being sedated, no one was going to hold their s—together for two and a half hours in those conditions . No matter how brave or confident you are before sticking your head [under the water]it’s just not possible.

JB: When I first heard that the boys were tied up and sedated so you and the other divers could carry them, I was horrified. I think the world was horrified. What gave you this idea? Was it the gas station attendants who freaked out when you dunked them on the first day?

RS: It was a few things. It was the gas station attendants. It was the fact that when we were practicing cave rescue in Yorkshire with a good friend of mine who is a very confident cave diver, he ended the exercise because he didn’t like being under the water and headed like that.

JB: It took a lot of persuasion to convince Dr Richard Harris, the Australian cave diving anesthetist, to go along with the plan. He initially gave him zero chance of success.

RS: I couldn’t see a reason why it wouldn’t work. There was a lot of planning as to how we were going to move the boys. And how we were going to deal with their airways and all that. If you had a question about any aspect of security, I could say that we have thought about it and here is the answer.

Thank you for respecting copyrights. Unauthorized use is prohibited.

JB: But you had no other ideas?

RS: There was no plan B.

JB: The Thai army argued for a while to leave the boys in there until the monsoon was over.

RS: It was never going to work because you couldn’t store enough food. You could never dive there when the cave was in full flood. Even with the rope in place, you couldn’t have shot yourself… The monsoon lasts three or four months, but when it is over, the water stagnates in the cave.

JB: And the CO2 level was going up, the oxygen was going down, some of the kids had started getting lung infections.

RS: It would never have worked [to wait till the monsoon ended]. I would say it was not a bet. It was a certainty. They were definitely going to die.

J.B.: With all of this over, you have been dragged from your peaceful retreat.

RS: I joke that my retirement was going well until those pesky kids came along. I wouldn’t say it has necessarily changed me as a person, but it has definitely changed the way I interact with the world, just the opportunities that arise. I was on a film set in Australia for two and a half months last year with Ron Howard, Viggo Mortensen and Colin Farrell.

JB: What should we learn from the world’s most famous underground rescue?

RS: Cooperation works. And trust the experts. This is true in other areas, certainly the coronovirus. I don’t know anything about epidemiology, and most people don’t either. At some point, you have to trust someone.

This interview has been edited for length and clarity.