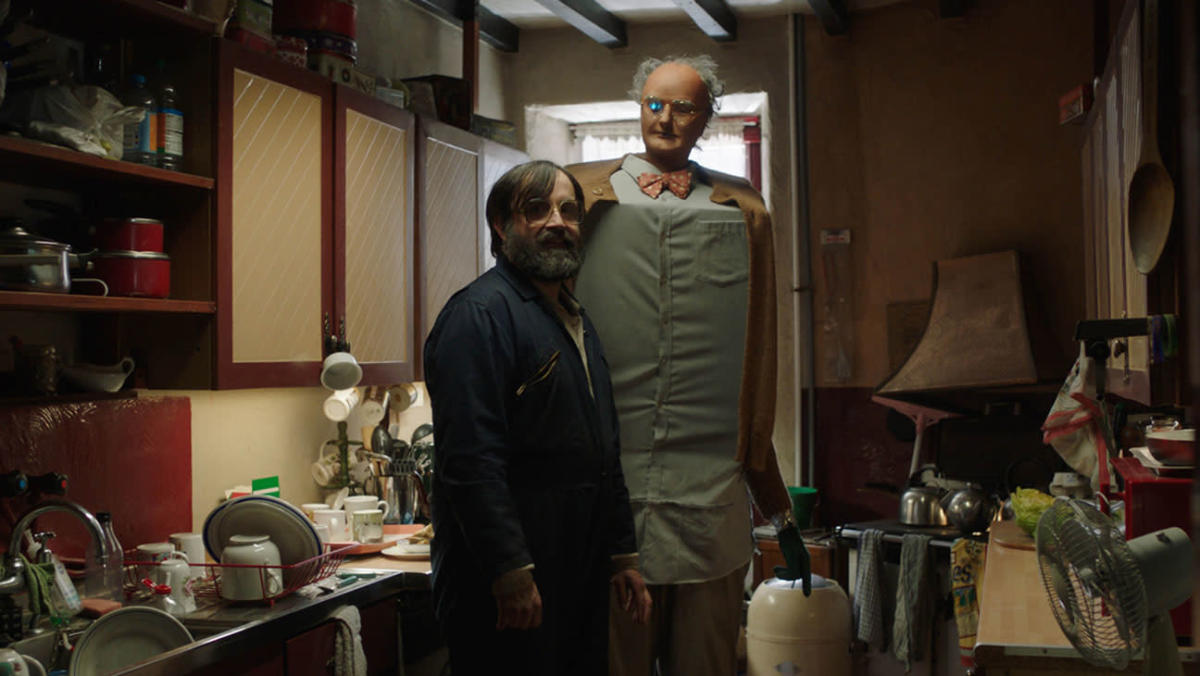 Brian and Charles could have been much darker.

The British comedy, which Focus Features aired in the US over the weekend, has been hailed as a delicious slice of feel-good weirdness, pairing quirky eccentric Brian Gittins (David Earl) with his peculiar robotic invention and innocent 7ft Charles Petrescu (Chris Hayward, mostly hidden by cardboard boxes with a cardigan stretched over the top).

More from The Hollywood Reporter

In The Hollywood Reporter, the two were described as a “goofy, charming duo”, with the film’s performances “terrifyingly sweet and heartfelt”. Despite its unlikely leads, the film, which won the Audience Award at the just-concluded Sundance Film Festival in London, seems to be sending most moviegoers off to a good start.

But it could have been very different, admit its director Jim Archer and producer Rupert Majendie.

“In one version of the edit, Charles actually dies for 10 minutes,” Archer explains. “There were a lot of things we cut that would have definitely changed the tone.”

According to Majendie, who also piloted Charles’ comedic robotic voice (done off-camera via a very basic-sounding computer program), it was early film backers Film4 and the British Film Institute that helped provide early direction. . After seeing the 2017 short on which the film is loosely based and the early incarnations of Brian and Charles on the UK stand-up comedy circuit, they suggested a lighter tone.

“They were like, ‘I can imagine people watching this with their families,'” he says.

During their early stand-up days, Brian Gittins and Charles Petrescu had distinctly different personalities that were more aggressive, confrontational, and, essentially, more adult than in the film. Archer claims Charles “basically reflected how drunk Majendie was” at the time. “I kind of feel like the version of them in the movie, they look alike but they don’t have the same backstory at all. They’re almost different characters, but they have the voice and the eyeglasses.

Even the 2017 short, although it established the foundations and premise of the feature film, had much darker times, particularly when Charles is banished from Brian’s farm alone in the cold hills of the Welsh countryside. , only to find his way home the next day, looking even more disheveled than usual.

“The short made us want to lean even more into the emotion in the movie because of how people reacted to it, and that reunion at the end, I guess that makes it a feel-good movie. be,” Majendie says. “That feeling of being together – we almost wanted to bottle that up and put it into the movie.”

Given that Gittens and Petrescu’s first big-screen outing was so well-received, with a particular focus on the relationship between the two characters, there seems room for more. And while a lot may hinge on the film’s box office success, Majendie admits that’s something they’ve been thinking about.

” We talked about What we do in the shadows and how it started as a feature, and could you replicate that model for a TV thing,” he says. “And because the world of Brian and Charles is so rich, is there something in it, or are you just making a Short circuit 2 kind of thing?”

The best of The Hollywood Reporter