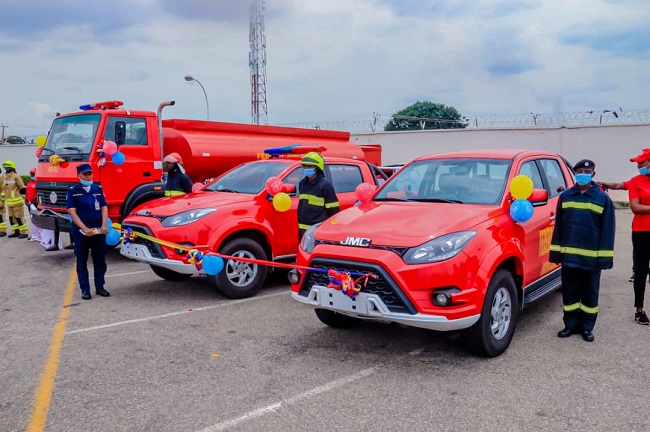 The donation was in line with an earlier pledge recently made by the state’s governor, Muhammadu Inuwa Yahaya, to strengthen firefighting in the state.

As the two vehicles were put into service alongside a dual-use fire truck, Inuwa Yahaya praised President Muhammadu Buhari for providing leadership through the Federal Ministry of Interior and Human Services. federal fire whose synergy with Gombe State contributes to efforts to protect the lives and property of citizens, especially during disasters.

The Governor added that “you may recall that in July of this year, when we gathered here to commission the state-of-the-art firefighting vehicle deployed in Gombe State, we committed to supporting the service by providing them with these hilux vehicles which can be used to access hard to reach areas and as utility vans for staff and thank goodness we were able to deliver on our promise today.

He also said the vehicles were provided by his administration to help the Federal Fire Service fulfill its mandate of keeping people safe, saying no amount of money was too much. important in trying to save the lives and property of the citizens of the state.

He added that the Gombe State government is committed to ensuring synergy with the federal government to ensure the safety and security of the lives and property of citizens, assuring the Federal Fire Service that its administration will continue. to support its operations for maximum productivity.

“Very soon, as I promised, we will provide a dignified office in the heart of the metropolis where the Gombe line is located once the Gombe mega park is completed and the transport company relocates, the Federal Service of fire and of course any other facility that will be useful to the center for people to enjoy and benefit from will be located in the center of the capital so that there is access and the service can easily reach people whenever this is necessary, â€added the governor.

Inuwa Yahaya called on the people of the state to give the federal firefighters the much-needed support and cooperation to enable them to operate successfully.

The governor said the Gombe State government, under his leadership, had previously refurbished around 7 abandoned fire trucks so far belonging to the state fire department, adding that his government would continue to do more to save people’s lives and property.

Previously, the Comptroller General of the Federal Fire Service, Dr Liman Alhaji Ibrahim, represented by the Deputy Comptroller General in charge of Zone I, Philip Odu, congratulated Governor Muhammadu Inuwa Yahaya for the prompt repayment of his pledge to provide the service. with two Hilux vehicles, pledging to ensure the judicious use of operational vans, as set out in a statement by Ismaila Uba Misilli, Managing Director, (Press Affairs), Government House, Gombe.

YOU MUST NOT MISS THESE NIGERIAN TRIBUNE TITLES

We haven’t had a water supply for months – Abeokuta residents

Despite the huge investment by the government and international organizations in the water sector, water scarcity has become a permanent nightmare for the residents of Abeokuta, the capital of Ogun State. This report x-rays the lives and experiences of residents getting clean, safe, and affordable water amid upsurge in COVID-19 cases in the state … Gombe donates firefighting Gombe donates firefighting

Selfies, video calls and Chinese documentaries: what you will encounter on the Lagos-Ibadan train