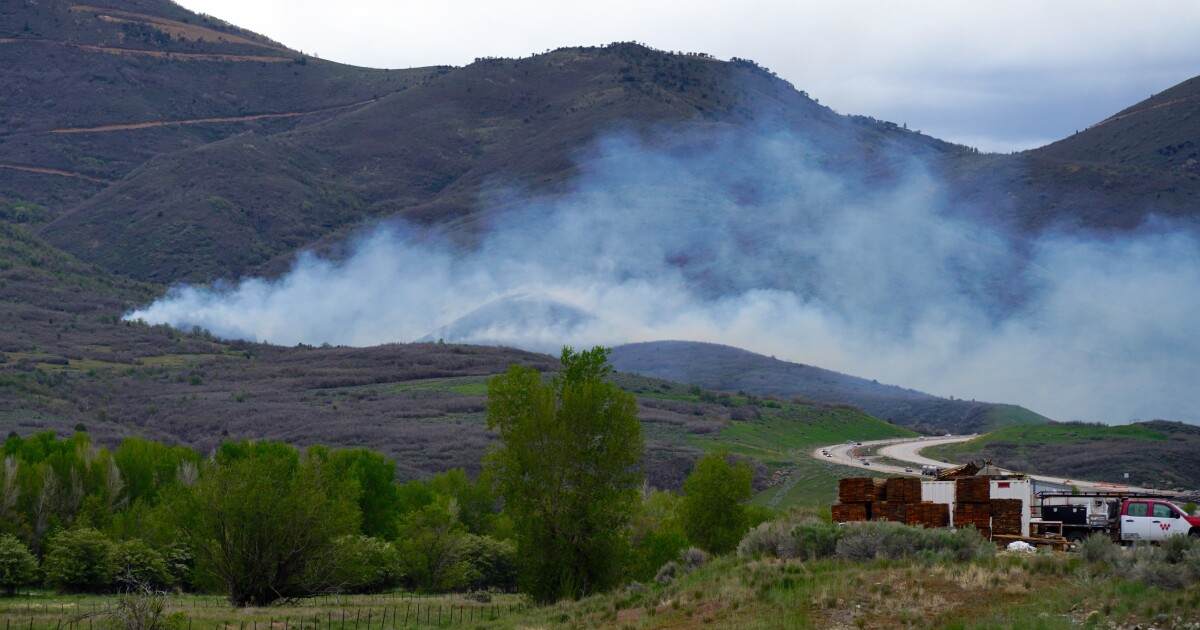 UPDATE 9.44pm: A spokesman for the National Forestry, Fire and Crown Lands Division told KPCW the fire is 5% under control.

8:40 p.m.: The spokesperson said that a short time ago an airdrop of flame retardant had the intended effect on the fire. No further updates on the area burned will be available until the morning, and although the fire is not under control, no structures are at risk. Highway 40 will be closed intermittently as needed for fire drops.

7:15 p.m.: The Flatline Fire has burned 85 acres. Park City Fire District, the Federal Bureau of Land Management and the US Forest Service are also on the scene.

6:48 p.m.: No structures or power lines are currently threatened. Crews are using hand tools to “frame” the Flatline Fire and an engine has reached the flames to use water. Mike Erickson of the state Forestry and Lands Division said winds were picking up but conditions were still favorable to contain the blaze.

6:29 p.m. Officials have confirmed the fire is man-made and are investigating details.

Wasatch fire crews are working to establish a perimeter around the 15-acre Flatline Fire near US Highway 40.

According to Mike Erickson, spokesman for the Utah State Forest and Lands Division, the cause of the fire that broke out on the Flatline Trail in Wasatch Mountain State Park is still unknown, but was not caused by lightning.

The fire was 0% under control at 5:30 p.m. Erickson estimated that eight engines and 40 firefighters were on the scene. Due to the distance from the road, crews must walk to the blaze to establish a dirt perimeter. A tanker plane is en route to the scene from Cedar City but was still about two hours away.

Erickson said the fire was not spreading quickly thanks to light winds and green vegetation that hasn’t fully bloomed. He hoped the fire would be put out later that night.

4:37 p.m.: Shortly after 4:30 p.m., the Wasatch County Sheriff’s Office announced that smoke near US Highway 40 was coming from a brush fire near the Mayflower construction site and asked the public to avoid the area , but the highway remained open.

No structures were threatened at the time of the announcement.

KPCW will continue to update this story as more information becomes available.