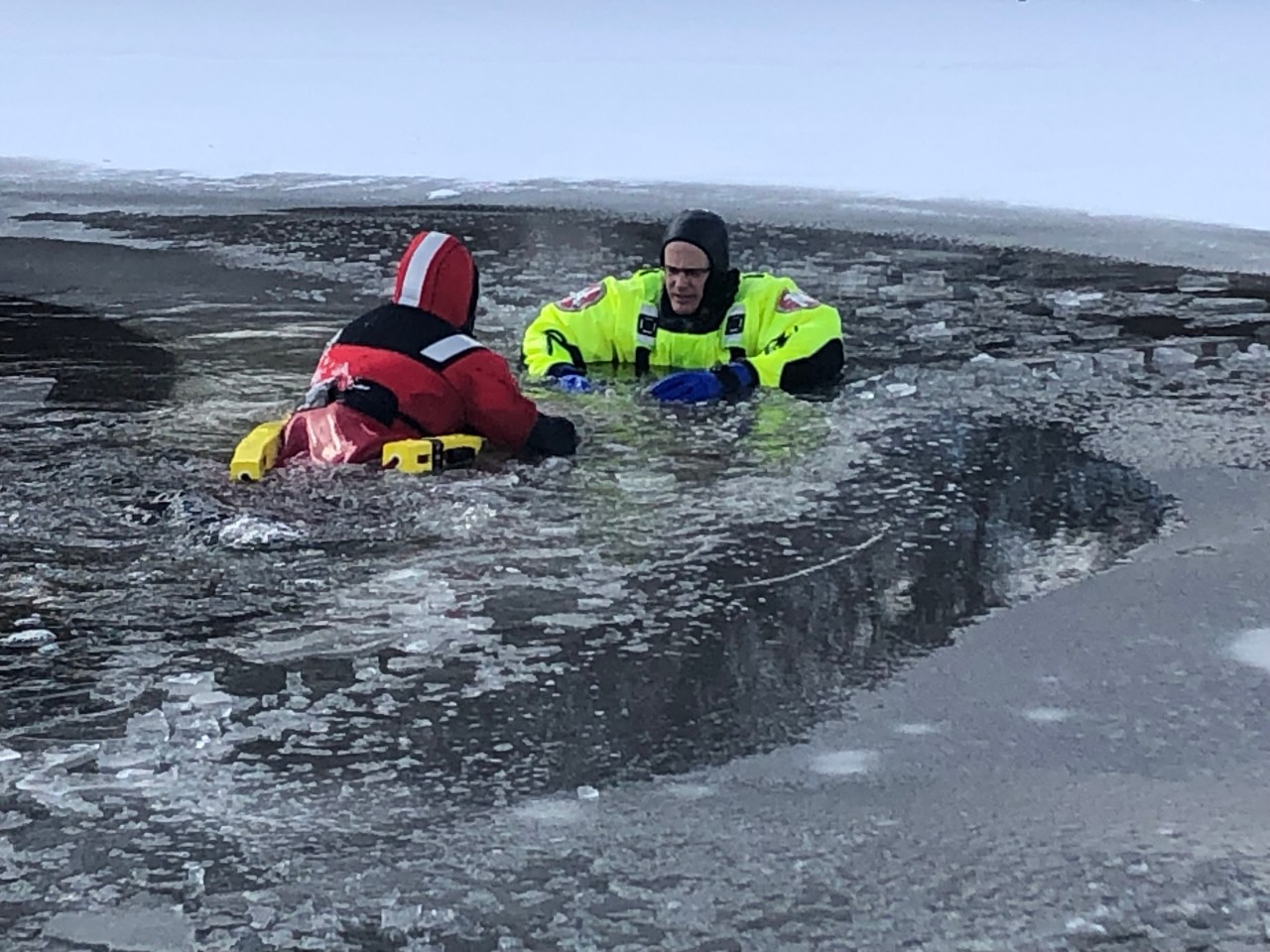 CENTRAL ILLINOIS (WMBD) — For most courses, you are seated in a classroom.

But when it comes to saving lives, you have to drop the books and get some hands-on experience.

Made up of first responders from central Illinois, this new organization will consist of 6-8 divers fully trained to respond to all kinds of situations. The team just had their first 3-day training course last weekend.

“This is an ice rescue training course that we teach to police officers, fire service personnel, it can be open to paramedics. Basically all first responders,” Chief Michael Johnson said.

But before officers can go out on the ice, they must first learn the basics.

But then it’s time to put the books down and the real action begins.

“They will learn how to approach that victim, put them in a rescue harness, help them on a spine board or whatever they have to save them. Then, safely remove them from the water. It’s a requirement that every firefighter and officer does this weekend. They need to get in the water and feel comfortable,” Barlow said.

WMBD’s Matt Sheehan participated in the training with Barlow and Johnson. Johnson & Sheehan headed out onto the ice, walking halfway then crawling the rest, before entering the pond at Quail Meadows Golf Course in East Peoria. Wearing immersion suits, you couldn’t even feel the freezing water. But if it touches your skin or gets into your costume, that’s another story.

“We can work several hours in these and still be pretty safe, as long as we don’t have a leak and get cold water inside,” Johnson said.

Part of the training is getting in the water and learning how to get out of it.

“It’s a golden hour. From the moment someone enters, you have 15 minutes to get them out before they lose the ability to save themselves. And you have about an hour from when the incident happened to bring them back,” Johnson said.

“They learn how to get out safely on the water and do a surface retrieve or get someone out of the ice,” Barlow said.

Barlow shared some quick tips for anyone who ends up getting stuck on ice or even falling in water.

“Depending on the location, the winds, the temperatures, this ice will deteriorate very quickly. It’s dangerous to be on any type of surface ice anywhere right now,” Barlow said. “If you can, raise your arms to the edge of the ice, stretch out and hold on to the ice. Unfortunately, what happens is that your clothes you’re wearing will freeze on the ice and they’ll hold you back. But just try to shout, but you have to calm down and get whatever help you can. If not and there is no one around, pull yourself onto the ice, place your stomach on the ice and roll. Once you’ve rolled, keep rolling until you get away from that open water, then crawl out.

Barlow said the worst thing you can do is try to stand or stand in the water, keep kicking and wear yourself out.

“At least put your arms on the ice, that’s the main thing,” Barlow said.

Barlow also said that if you’re the lifeguard, you need to be fully prepared before you hit the ice.

“You have to be tied up, have ropes or something like that, if you go out to attempt a rescue you can save yourself,” Barlow said. If you don’t have a lifeline in place, you put yourself in a situation where you become a victim in the water. Just approach the victim and calm him down. Help them get out of the water and roll over the ice. Be sure to call 9-1-1, you tell them what you have, where you are and what the ice conditions are.

Johnson said his officers have a ton of experience as first responders and are ready to provide the best possible service to central Illinois.

“We have two new officers who are both Peoria firefighters with nearly 30 years of experience as dive masters. They give us a lot. They’re both just graduated from the police academy and they’re going to help lead this team,” Johnson said.

“If you go into the water, one of the main things you can do is calm down. You’re going to get the shock of first entering the water,” Barlow said.

Chief Johnson said rescue attempts aren’t the only calls his officers will respond to.

“It could be anything from recovering a body to someone driving a car into the river, or we’re doing a search for articles because someone threw a gun over the bridge” , Johnson said.

These rescues take place year-round, especially during the summer months when central Illinois is very busy with boaters.

“We unfortunately have more cases of people jumping off bridges. We have more incidents of boating accidents where someone may have fallen out of a boat, alcohol related,” Johnson said.

The goal of the program is to train as many law enforcement officials as possible and provide the best possible service to Central Illinois.

Johnson said his department has been in maritime law enforcement for more than 20 years.

“We’ve always been the team that goes out and does the location, using sonar, and we contact another agency to do the dive operations. But Peoria can’t do much. With our agency we cover four counties (Peoria, Tazewell, Woodford, Marshall) so we are trying to get a law enforcement dive team together so we can help them. If they are tied up, we have divers available. Plus, our divers will go anywhere,” Johnson said. “We went all the way to Chicago to help other agencies for dive teams.”

Over the years, the unit has grown from a small patrol craft providing basic response to one of the major Marine units in the Tri-County area, Johnson said.

“Through an interagency agreement with the United States Coast Guard, our agency now provides patrol coverage for the Illinois River between River Mile Markers 139.6 through 181.3. Operate multiple watercraft including our 30ft twin-engine rescue vessel, a 20ft Boston whaler and a hovercraft,” Johnson added.

Currently, the marine unit has 2 master divers. The goal is to have 6-8.

By providing training to other agencies, the new dive team can create a revenue stream for the agency to help fund equipment and training.