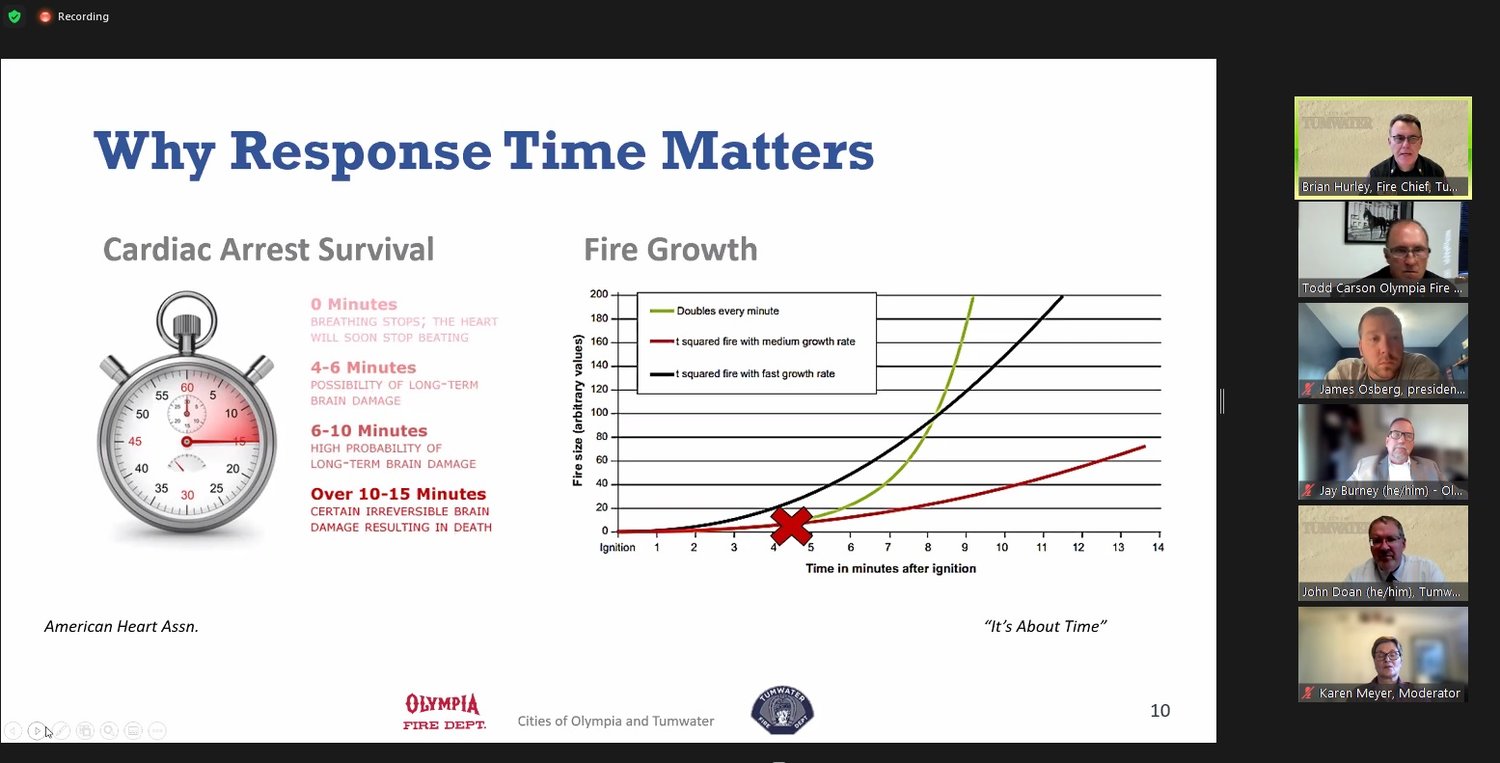 Tumwater Fire Chief Brian Hurley said the creation of a Regional Fire Service (RFA) is the best way to address the challenges facing the fire services in Olympia and Tumwater.

The RFA Planning Committee held an hour-long online meeting at Town Hall last night, August 15, to discuss the potential RFA and its benefits to community members in Tumwater and ‘Olympia. The meeting was attended by 11 committee panelists and 22 community members.

According to Hurley, Olympia and Tumwater have a total of six fire stations. They are staffed 24/7 with different response units.

Hurley said those two cities have a combined full-time workforce of 150 people, covering more than 38 square miles and serving more than 81,000 residents. “The two agencies are on a combined total of about 20,000 responses per year.”

The challenges of firefighters

Hurley said six jurisdictions commissioned a study from Emergency Services Consulting International (ESCI) in 2019. “What they did was they looked at opportunities to gain efficiencies. One of the things that came out of that study was the idea of ​​a regional fire authority.”

The study also identified challenges, including the limited resources of the two fire departments and the need to maintain the communities’ growing fire/EMS (emergency medical service) needs.

Olympia Fire Chief Todd Carson said the community is growing, so service requests continue to grow. “Cities have done a great job of trying to meet this demand for services. But the resources and the demands exceed these revenues.”

The other challenge identified is the decline in average fire/EMS response time, according to Hurley.

Carson said call volumes are increasing every year. They aim to reduce response time to six to seven minutes or less for 90% of calls.

The Tumwater Fire Chief said both towns were below. He said Olympia’s response time to emergency calls was seven to nine minutes, while Tumwater’s was over nine minutes.

Why is response time important?

In the event of a medical emergency, such as cardiac arrest, Hurley said the critical time to give people emergency care is between four and six minutes. He said they are seeing the highest survival rates for cardiac arrest patients. “But as time passes without proper care, we see irreversible damage.”

Hurley added that the two fire departments respond to various medical calls in partnership with Medic One, which is a Thurston County program that provides advanced life support through seven paramedic units located throughout the county.

“We are no longer dealing with legacy constructions and organic materials in your homes. We are not talking about wood. We are talking about synthetics. Everything we buy today to furnish our homes – flooring, sofas, pillows, the tarp – is a synthetic base,” Hurley said.

The other thing concerning, according to Carson, is the type of smoke it emits. He added that black smoke quickly displaces oxygen.

With an RFA, Hurley said, they can provide a way to maintain and improve response times.

Doan said the FBC formula is based on an industry standard formula developed by the National Fire Academy and the International Organization for Standardization (ISO). Four of the 13 regional fire authorities in Washington use this formula, which is adjusted for each zone. .

After a 30-minute presentation, moderator Karen Meyer read questions from community members. She said they couldn’t go through all the questions and condensed a few inquiries that were the same.

Carson responded that having a training capability for firefighters to be effective in dealing with different situations.

Doan said that means having human resources for RFA. He explained that hiring firefighters is often time-consuming – with different testing and interviewing processes.

“If we can’t hire firefighters fast enough, we end up paying overtime for vacancies that don’t have to be open that long,” Doan said, adding that the RFA would have its own human resources staff, ” whose task is to hire firefighters and fill these vacancies even faster.”

Doan added that if the two fire departments were merged, they wouldn’t need to have spare engines for each of the six fire stations. “The pool of three to four engines is enough for both cities instead of creating a duplicate reserve engine pool.”

Hurley added that having two battalion models means having 35 people on daily duty and 12 response units. “It adds another layer of security in terms of response.”

Another participant asked about the proportion of fire and medical calls.

According to Carson, approximately 80% of call volume is EMS based. The 20% is made up of various service calls and a small percentage of structural fires.

“Don’t be fooled by this low percentage. When there’s a structural fire, that’s when we need capacity. When the need arises, you’ll want a full response,” Carson said.

The third question from a community member was about effectively merging the fire departments without creating the FBC mechanism.

“That would be very difficult to do,” replied Olympia City manager Jay Burney.

Burney said they were looking at many options, but “the 2019 ESCI study indicated that regionalization was the best solution for fire service amalgamation…for a number of reasons that [the] said the fire chiefs. »

Doan added that having RFA would allow the two cities to work collaboratively on public and community safety measures.