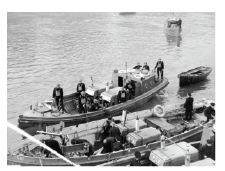 It would be almost 20 years before London had a new fireboat. There ‘firewall‘ arrived in Lambeth in 1961, replacing the aging Braided wood and join the Massey Shaw like the two fireboats of the capital. In the years since, there has been a significant change in the nature of the risks on and along the Thames. The Brigade has reviewed its supply of fireboats.

With the Massey Shaw already decommissioned firewall followed suit in the mid-1970s. Two boats, of identical design, were purchased, the fire falcon and the rapid of fire. Measuring just under 14 meters in length, the boats carried light pumps to power its small bow-mounted monitor. There ‘Falcon‘ covered the upper Thames and the ‘Fast‘ was stationed at Greenwich Pier, down the river. Subsequently, the downstream station was closed. The Brigade’s only remaining fire station remained at Lambeth.

In April 1985 London Phoenix was put into operational service. The Phoenix was built as a catamaran. Measuring 18 meters long and seven meters wide, its two diesel marine engines delivered six hundred and twenty horsepower. A salvo of water could be discharged from her four deck monitors powered by her two fire engines, capable of pumping nine thousand liters per minute. With her bright colors and a top speed of 12 knots, she stood out among the myriad of craft on the Thames. The Harness of fire was retained as a reserve fireboat.