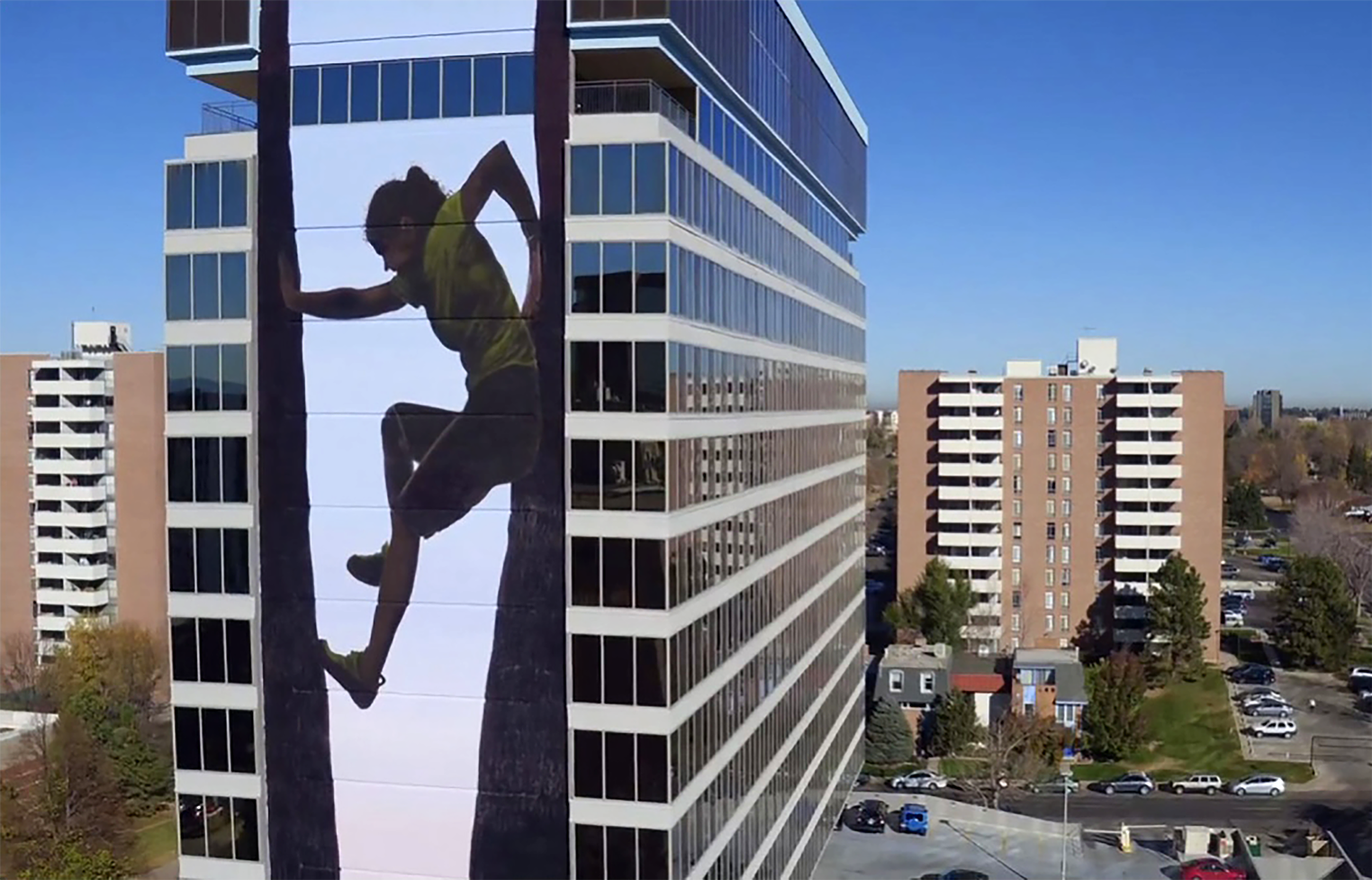 Chris and Will Krieg sit at a picnic table laughing, beers in hand, covered in paint after a long day at work. Sitting across from them is Will’s childhood best friend, Andrew Vasko, and they all talk jovially about the project of the day: a large expanse of bold letters above the entrance to Bruz Beers in the Twin Lakes neighborhood northwest of Denver. The Altitude Murals team is made up entirely of this trio, which is surprising considering the breadth, range and quality of work they’ve created – not just in Denver, but across Colorado and into several other western states.

Altitude Murals started in 2018 with just the father-son couple of Chris and Will; Vasko joined in 2021 when the business was booming. Artists’ styles range from lettering and photorealistic images to cartoon characters and abstract geometry. One of Chris and Will’s most stunning murals, “Free Climber,” towers 150 feet tall near the intersection of I-25 and Colorado Boulevard, and can be seen from miles away. They finished it in just one month.

“The Kiss” was commissioned by Andrea Frizzi for her restaurant Il Posto in RiNo.

Chris and Will Krieg

Each of their murals is painted by hand, using finely ground oils and glazes. “We use what the old masters used,” Chris explains. “It lasts forever, and when it fades, it fades elegantly. It’s great art, mixing colors, using small brushes; we spend hours and hours painting these things. That’s how I learned and that’s what I pass on to these guys.

Chris estimates that he has painted nearly 10,000 panels and murals. Growing up in Oakland, he got his start in 1973 as an apprentice for Foster & Kleiser, one of the leading advertising and display companies of the 20th century. There he learned the ins and outs of large format fine art painting, “from sweeping the floor, to cutting out structures, to rigging and bouncing them,” says Chris. “We were just slow printing presses back then.”

In his late twenties, Chris decided to move to New York to pursue his creative endeavors. He immersed himself in the New York art scene, painting countless works of art on canvas, modeling, writing for interview magazines and even creating his own publication. In the meantime, he continued to work as a journeyman for Foster & Kleiser’s New York factory, painting signs, billboards and buildings throughout the city.

He and his wife decided to leave New York when they discovered she was pregnant with their first child, and her profession as a flight attendant brought them to Colorado. They moved to Evergreen in the early 90s, and it wasn’t long before Chris was driving down Colfax Avenue painting and repainting the signs and billboards of many local businesses. “I left and did other things, but I always come back to that. Listen, I’m 67 and I love what I did today. I just painted two letters and Will was yelling at me the whole time,” laughs Chris. “I still love doing it after 49 years.” 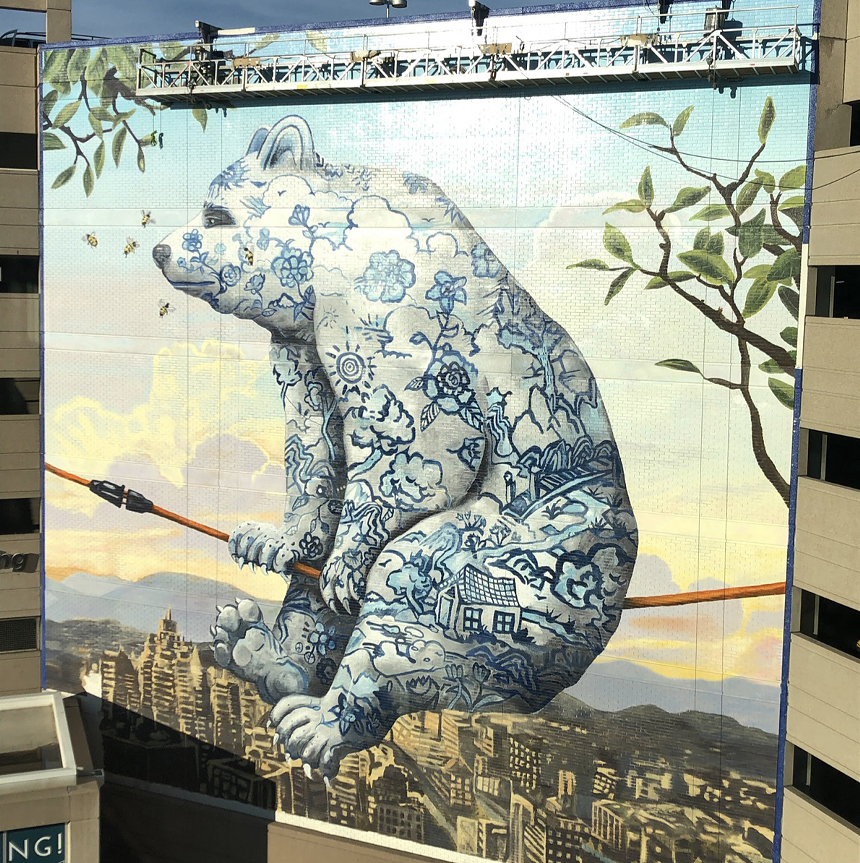 Chris and Will Krieg

When the couple’s second child, Will, arrived, Chris decided to start his own sign business in Evergreen while continuing to work as an entrepreneur. It was the 2000s and the vinyl-wrapped billboard trend was taking the advertising scene by storm. “I couldn’t give away a hand-painted sign,” Chris recalled. “They replaced me with computer-generated vinyl. But I had to make a living. And in the meantime, I was still doing murals.

Will and Vasko also remember the vinyl phase: when they got into trouble as teenagers, their punishment was helping to fold and wrap the large sheets of vinyl Chris used for his poster work. They didn’t know it then, but it was the start of their own journey to becoming muralists.

Will says he avoided his artistic side for as long as possible. He trained as a firefighter, traveled and lived overseas, and also worked as a mechanic alongside Vasko in Fort Collins for a few years. It wasn’t until his dad needed help painting “Free Climber” in 2016 that he realized mural painting was something he wanted to pursue.

Then it was his turn to go to New York. Will got an apprenticeship at Colossal Media, an outdoor advertising company with the same values ​​and emphasis on hand painting that his father had learned and practiced. For two years, he devoted himself to craftsmanship, obtaining his certification as a master rigger and increasing his knowledge of the world of murals. “It’s not just about showing up and painting a mural,” he explains. “It’s the rigging, the set-up, the breakdown, the engraving diagrams… The rest is more technical. Painting is the easiest part.

After exhausting himself for sixty to eighty hours a week in New York, Will decided to return to Colorado, where he formed Altitude Murals with his father. Chris was just getting started painting murals, but when Will came back with new energy and ideas for Altitude Murals, they decided to pick up where they left off two years earlier with “Free Climber”.

“I was blown away by the information he came back from New York with,” says Chris. “Because I gave it a taste, and he ended up really elaborating on it. He obviously saw the value of learning as much as he could in a short time, and he came back with some really good skills. Other than Andrew, he’s the best apprentice I’ve ever had.

Vasko has been creative for as long as he can remember, but he couldn’t go to art school. Like Will, he ended up traveling, trading, and changing jobs before finding his way back to his artistic instincts. Since joining Will and Chris in the spring of 2021, he has learned the ropes, pioneered new design work, and helped run the business side of Altitude Murals.

“[Chris is] like my surrogate dad because I’ve known him for so long, and [Will and I] are pretty much brothers, so every time I’m on the wall with them, it’s so much fun,” Vasko says. “I don’t know how many people can say they love their jobs and work with their best friends. We love what we do.”

With each artist using their own personal practice of artistic painting, it is clear to see what sets Altitude Murals apart from the Denver mural scene, namely quality and archival value. “It’s as classic as it gets,” says Will. “We love to create something timeless for everyone, not just museum goers or private collectors. This is art for the masses.

As for what’s next, Altitude Murals has another large-scale project coming up, but the team is keeping details under wraps for now.

“Our work is about community engagement – IIt depends on the environment it is in,” concludes Chris. “What would work best in this neighborhood? And how will people find their way in ten years? Do people feel good where they live? We create beautiful images that people can’t wait to watch.”