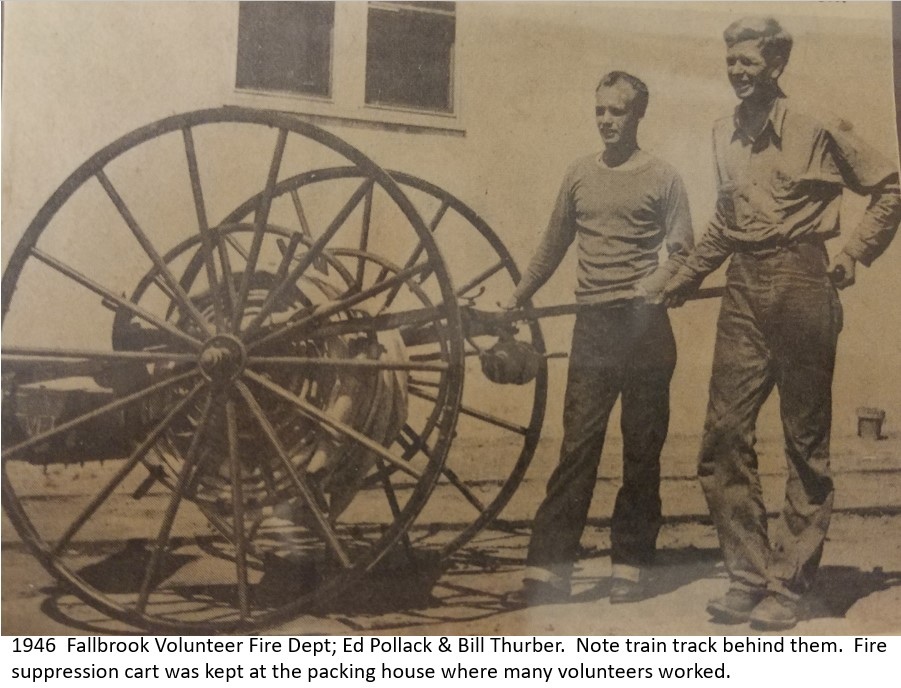 As the looming fire season quickly approaches, the residents of Fallbrook hope that they are untouched by the ravages of the past underworld, but they can be sure that fire services have come a very long way. In Fallbrook’s early years, firefighting was rudimentary. Water was scarce and in 1885 – 16 years after the first establishment registered by the Reche family – firefighting depended on a brigade of buckets. Sometimes the fires were just left behind.

However, as the city grew, the threat of a fire became more and more ominous.

“A stove fire in 1904 at a barber shop on the northeast corner of Main and Alvarado raised concerns that a major fire could destroy all buildings in the city center,” Roy Moosa said. , president of the Fallbrook Historical Society.

In fact, the fire spread to nearby businesses, including the Fallis Brothers General Store, burning the entire block between Alvarado and Hawthorne to ashes. As a result, in 1907, local business owners installed a water system to protect their stores.

â€œA gasoline pump and 10,000 gallon raised water tank were built where the Arts and Culture Center is today,â€ added Moosa. “It was the first step towards formal fire protection.”

Subsequently, in 1911, GA Byron was appointed fire director for the district, followed by Henry Ellis in 1912 and Fred White in 1916. In 1921, John Clark became the first fire director of the assigned California forestry division. in Fallbrook. Yet the fight against fires has remained unsophisticated.

In her book “TRIBUTE: Profile of San Diego County’s Fire Departments,” Pearl Ellis said: “When a fire occurred, John Clark would hand out gourds, wet bags, shovels and other equipment to anyone in sight and asked him to fight the Fire. “

In 1922, the Fallbrook Public Utility District was incorporated to supply water from a reservoir and well to meet the needs of the downtown area, which has an area of â€‹â€‹approximately 500 acres. A new 200,000 gallon tank was erected near the corner of Minnesota and Dougherty streets, 185 feet above the heart of Fallbrook.

Another milestone came in 1926 when the first firefighting equipment was purchased – a hose and cart – which could be hand-pulled or towed to a fire by someone’s truck. He arrived in November 1927.

The Fallbrook Enterprise newspaper captured the moment of his arrival saying:

â€œThe new fire hose, which arrived in Fallbrook on Friday, generated a lot of interest, giving every resident in the community a sense of protection, which is worth the few hundred dollars it cost.

The pipe and cart, which are now housed at the Fallbrook Historical Society Museum, marked the start of another wave of firefighting improvements in Fallbrook.

A Ford Model A fire truck was acquired in 1928 under the auspices of the CDF, followed by the Fallbrook Volunteer Fire Department organization in 1930. The service, said FHS historian Tom Frew, had a ” long and colorful history of dancing, fairs, parades and other fundraising to fund the organization, â€including the purchase in 1931 of a year-old Dodge fire truck.

Progress continued with the appointment of Bob Aaberg as Fire Chief in 1930.

According to Moosa, Aaberg quickly announced that “Ed Myers would grant the fire department use of his land behind the Hill shoe store for the site of a fire station. A material and construction estimate of a fire station to accommodate two trucks was donated $ 393.80. “

A succession of other notable fire chiefs continued, including Carl Palm in 1932, Carroll Huscher in 1934, and Bill Thurber in 1942. The department, however, was dissolved in 1945 when most volunteer firefighters, including Thurber, went to fight in World War II.

Two years later, in 1947, Chief Thurber returned and re-established the Fallbrook Volunteer Fire Department with 13 base volunteers. The district office was located in its welding shop at 1019 S. Main Ave., the current location of Firehouse Broiler.

Thurber, the longest-serving fire chief in Fallbrook history, is considered an icon in his field. Under his leadership, a resuscitator was purchased in 1948 through the solicitation of donations from the community and a significant contribution from the Rotary Club. This equipment can also be found at the Historical Society Museum.

Thurber also implemented the use of shortwave radios between units, stations and planes, making it the first fire department in the state to do so. Additionally, Thurber donated his one-ton 4X4 military truck, which was converted into a tanker truck. He became the first Fire Marshal when the local Fallbrook Fire District was formed in 1953, then reorganized in 1961 as the Fallbrook Fire Protection District. In 1987, the district merged with the Rainbow Volunteer Fire District to form the North County Fire Protection District.

The father of FHS member Nile Peterson, Arlan, worked as a volunteer firefighter under Thurber in the period 1950-1960, reaching the rank of deputy chief.

â€œWhen I was a child, an old siren on top of the hill tower near the current Ivy Street station would go off when a fire was identified, signaling all volunteer firefighters to intervene,â€ recalls- he. â€œOver time, the siren was replaced with a small doorbell attached to a wall in our house that was triggered by a local operator. After that, a one-way radio sent a call to staff.â€

Peterson also recalled one of his “best memories” of his father’s 20 years with the Fallbrook Fire District.

“The firefighters were decorating a truck over the Christmas holidays and we the children would get on board with our fathers,” he said. â€œWe would go around the neighborhood singing Christmas carols, then return to the house where our mothers were waiting for us with homemade donuts and hot chocolate. “

Thurber was replaced by Andy Vanderlaan as fire chief in 1976, until 1996. Another member of the FHS, Don McLean, Jr., served as fire captain under Vanderlaan. His father, Don McLean, Sr., served as a volunteer firefighter under Thurber in the 1950s and early 1960s, reaching the rank of Deputy Chief. Vanderlaan was followed by Ed Burcham from 1996 to 2003, then by William Metcalf from 2003 to 2015.

Chief Metcalf, who also served as the District CEO, oversaw the reconstruction of aging Station 3 in 2008 and the construction of a new Station 5 in 2014. He also helped develop an assessment complete and a strategic plan to guide the future of the neighborhood. This included a baseline assessment that compared the district to national standards and current practices. This plan remains a compass that guides the activities and priorities of the neighborhood today. He retired in 2015 and was replaced by Stephen Abbott who served from 2015 to 2021.

Chief Abbott began his career in the district in 1990 as one of the first paramedics. He then became a team battalion commander, emergency medical services chief, and then division chief for administration. He was Deputy Fire Chief from June 2015 to September 2015.

Current Fire Chief Keith McReynolds also has a long history with the district, beginning in 1990 when he joined as a Fire Exploratory Scout and then served as a Reserve Firefighter.

â€œI grew up watching the TV show ‘Emergency’ and it instilled in me the desire to be a firefighter,â€ he said. “I grew up in Vista, but they didn’t have an Explorer program, so I joined the Fallbrook program.”

Chief McReynolds attended Palomar Community College Fire Academy, where he obtained his Paramedic Certification. He then obtained an Associate of Science in Fire Administration from Santa Ana College, a Bachelor of Applied Science in Fire Science Administration from Waldorf University, and a Master of Arts in Organizational Leadership / Emergency Management Leadership from Waldorf University.

What does he find most difficult about his new job?

â€œAs we move into the fire season, risk mitigation is definitely one of our main areas of focus,â€ he said. â€œWe recently launched a new Community Outreach Task Force that is working hard to establish better collaboration with our residents to keep them safe.

Outreach efforts, McReynolds said, include a significant social media presence through a post shared with the Fallbrook Health District.

â€œMy personal mantra is ‘North County First’,â€ he said. “We need to improve our fire safety and preparedness by working closely with our community and improving our capabilities with software system upgrades, device replacements, installations and training.”

The North County Fire Protection District covers 92 square miles, including the communities of Fallbrook, Bonsall and Rainbow, with a total population of approximately 50,000. The district has five stations, all of which are staffed with full-time paid staff and single-role paramedics and paramedics. The district also provides emergency medical services for an additional 40 square miles outside of the main service area.

The Fallbrook Volunteer Fire Department raises money with a fundraising dance, 1947, for equipment. There were 13 main volunteers at the time.

In recent years, the North County Fire Protection District has provided invaluable assistance during the devastating fires of 2003 in Cedar, Paradise and Otay; 2007 Rice fire; The highway fire of 2014 and the Lilac fire of 2017.

NOTE: Sources of information for this article include: