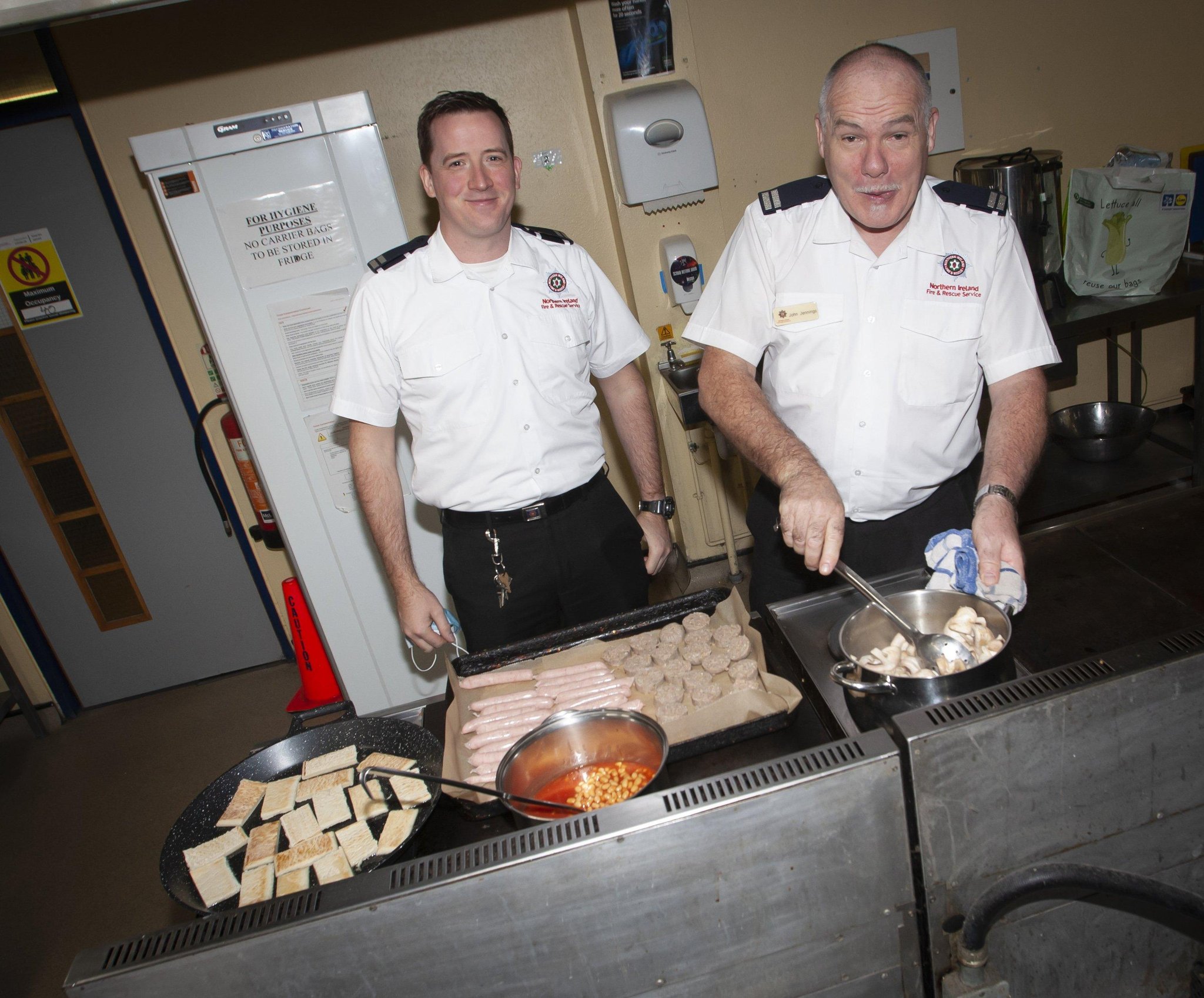 “Elvis” left the building after 30 years of firefighting service

The 59-year-old began his service with the Northern Ireland Fire Department in November 1991 with White Watch at the Northland Road Fire Station, under the direction of NCO Phil Devine and Station Officer John Gurney.

Married to Annette, father of four and grandfather of eleven, he hopes to enjoy his retirement by gardening and playing golf, while dedicating part of his evenings to his music.

During his time with the fire service, John served 15 years with the Watch, earning him the nickname “Elvis” due to his rock star status playing in the many pubs and clubs of Derry and Donegal. .

John Jennings pictured on the morning of his retirement making breakfast for others in the Crescent Link Fire Hall office. To the left is his son Noel. (Photo / s: Jim McCafferty Photography)

Indeed, as a specialist firefighter response officer, John has played a key role in the protection and advocacy of young people and vulnerable people in the community while working closely with colleagues from Youth Justice. Agency, the Western Education and Library Board, and the PSNI, among others.

A few years ago, the affable firefighter was also nominated for the â€œPerson of the Yearâ€ award for his service to the community.

The Coshquin native is leaving the service in good hands, as his son Noel has followed in his footsteps, now also stationed at the Crescent Link fire station on the waterfront.

John and his son Noel pictured outside the Crescent Link Fire Hall on his last day of duty.

John has faced many dangerous, difficult and distressing situations during his 30 years in the fire service and answered many difficult calls.

â€œI have a lot of stories, some good and some not so good, but I come away with a lot of positive experiences over the years. It’s hard to leave, but retirement concerns us all.

Reflecting on his service, he added, â€œI’ve had time to reflect on what I’m most proud of about my time here – and I would say I’m proud to have made a difference within our communities and of our service.

â€œI have worked with brilliant people.

â€œThere are many reasons I have been in the service for so long – but one of the main reasons is because of who we are as a service and the culture that is here.

While a firefighter, John responded to a number of incidents that he admits he will never forget, including a number of serious traffic collisions and rescues.

He said: â€œJohn has been a dedicated member of the Northern Ireland Fire and Rescue Service for 30 years and I have had the pleasure of working with him in several roles.

â€œHis high work ethic and commitment to the role he played have been inspiring and I know he has been a very credible and valued officer who has produced significant results for the communities of Derry and the District.

â€œWe all wish him a good retirement. “

John pictured on the occasion of his retirement with his wife Annette, and in the back, children – Cathal, Aoife, Una and Noel.
Retired firefighter John Jennings pictured on retirement with some staff at the Crescent Link Fire Hall. Back from left, Noel Jennings, Gillian McClelland, Claire Mooney, Rosemary Doherty; and in front, left to right, Brian Birney, Kevin McLaughlin, Simon Green and Peter Melarkey.
CUT THE CAKE !. . . Cutting the cake to mark John’s official retirement from NIFRS are Annette, John’s wife and children, Aoife, Una, Cathal and Noel.