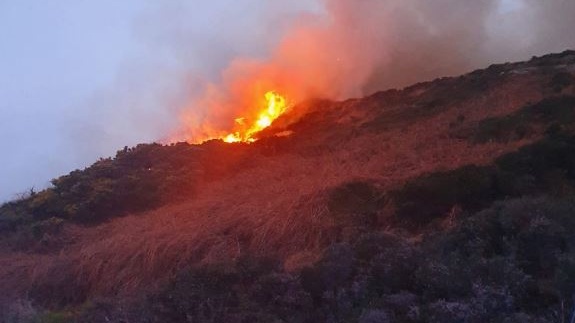 Firefighters have three units and a district officer at the scene near Balscadden.

Vegetation in the Irish countryside is at risk from fires due to the recent dry spell and sunny weather, firefighters say, and these wildfires can spread quickly and cause serious damage to land and property.

Firefighters said these fires are often caused by human activity and people should try to limit any activity that could cause a fire, especially on sunny days.

They advised the public to avoid lighting campfires and barbecues outside of designated areas, and all smoking materials should be disposed of responsibly.

People enjoying the outdoors and other amenities should leave no trace, which means all trash should be brought home.

“Energy from the sun can be amplified through glass bottles, and waste can be set on fire by opportunistic arsonists,” the fire department said on its website.

They encouraged people to report suspicious or anti-social behavior to the gardaí as soon as possible.

Firefighters also said people should not park their cars on grassy curbs because the car’s exhaust system can start a fire.

They also urged people to park responsibly, as illegal and irresponsible parking can hamper firefighters’ efforts to get to the blaze quickly.

2022-03-21
Previous Post: Merritt Fire Department gets new brush truck in time for next fire season |
Next Post: 9 Types of Personal Loans to Meet Your Needs