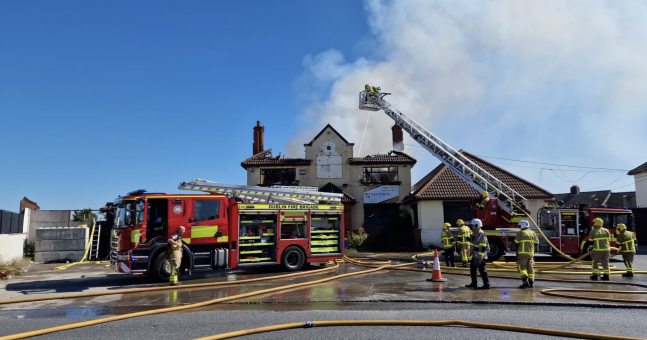 The pub, where gang leader Eamonn ‘The Don’ Dunne was killed in 2010, has remained closed ever since.

Footage is circulating of a huge fire at the derelict Fassaugh House pub in Cabra which broke out last night and was fought by Dublin Fire Brigade with the help of DCC.

In a post on Twitter, DFB said four fire trucks were needed to tackle the blaze, along with a rotating ladder that acted as a water tower, battling the fire from above. Dublin City Council crews provided an increased water supply to the scene of the fire. DFB described the fire as “well developed”.

Overnight, four fire engines responded to a well-developed fire in a vacant building in Cabra.

A revolving ladder at the Tara Street Fire Station fought the blaze from above and @DubCityCouncil the crews provided us with increased water supplies at the range. pic.twitter.com/Xu6Gll9kWt

The Fassaugh House pub in Cabra, also known as Matt’s, closed after the murder of ‘The Don’ – who was the leader of one of Ireland’s most dangerous crime gangs, according to the Sunday World .

Last year, An Bord Pleanála received a planning request for 137 ‘Build to Rent’ apartments to be built on the site of the former pub. In a Facebook post at the time, local councilor Cieran Perry said DCC had been forced to spend money maintaining the pub since it closed.

Having paid for numerous site cleanups before, CDC was forced to install steel casings on the building last week as a safety measure to prevent young people from accessing the building… It is outrageous that the owners are allowed to leave the site in such a dilapidated state on one of the main roads through Cabra, creating a very poor impression of our area for residents and visitors alike.

He also spoke out against the Build to Rent apartment project on the site, writing:

READ NEXT: Burgers with a side of abuse – Karen’s Diner is coming to Dublin