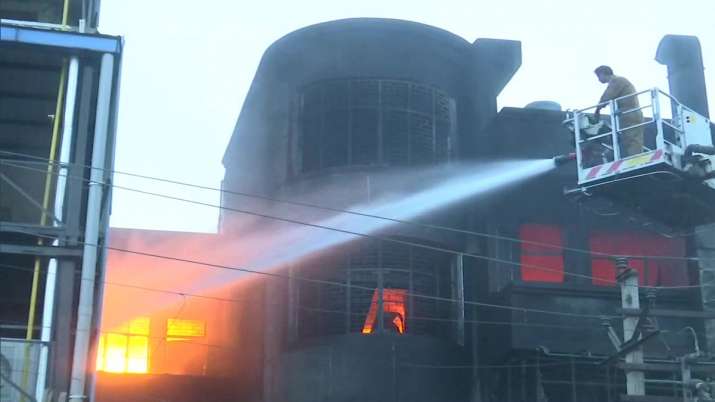 Narela Fire Updates: The fire at the Narela plastic granulation factory in Delhi has been “completely brought under control” after hours of fighting, the Delhi fire department confirmed on Sunday (May 15th).

The factory had caught fire on Saturday evening.

“The fire was caused by the short circuit. No casualties or injuries were reported here,” confirmed Delhi Fire Station Officer Om Prakash.

According to Prakash, the fire was caused by a short circuit and other potential causes of the fire are yet to be determined. Earlier in the day, the declared ‘medium category’ blaze did not fully extinguish as water was unable to reach the ‘small pockets’ of the plant and reignited.

Officials had also reported that problems with the operation were due to the “small pockets” and the great depth of the building.

Notably, 22 firefighters rushed to the scene initially on the night after the blaze broke out and officials found no one was trapped inside the plant.

Also Read: Fire breaks out at plastics factory in Delhi’s Narela with no casualties so far

What did officials say earlier in this regard?

“The columns are bending due to the heat and the building is unsafe. The fire was completely extinguished overnight but there was a small pocket inside the building which was smoldering due to which, the fire went started again and took the same shape. We’re not able to get inside. We are putting out the fire from outside. It should be brought under control within the next 2-3 hours,” the Divisional Fire Officer said. AK Sharma.

The official said that problems in the operation are also caused due to the “small pockets” and the great depth of the building.

“In fact, the depth of the factory is very high and we cannot go inside due to excessive heat in the building. building,” he said.

“Water can’t go to the actual seat of the fire. You can see we’ve called our hydraulic platform vehicle here so that if there’s anyone stuck inside, their life We will fight the fire there from the outside and will not put the lives of our firefighters at risk,” Sharma added.

“At present, there are a total of three gazebos and three water tanks at the fire site. Two more vehicles are coming because officers need to put three vehicles into continuous operation. Due to the filling process , they called more vehicles for reinforcement,” he said. .

“We received the call about the fire in the Narela industrial zone at around 9:10 p.m. Firefighters arrived on the scene and declared it to be a medium category fire. reported,” SK Dua of the fire department told news agency ANI last night.

2022-05-15
Previous Post: Delhi: Firefighting operations after the fire that broke out in the Narela area last night. See the details
Next Post: Crane operator saves 50 lives as firefighters arrive late