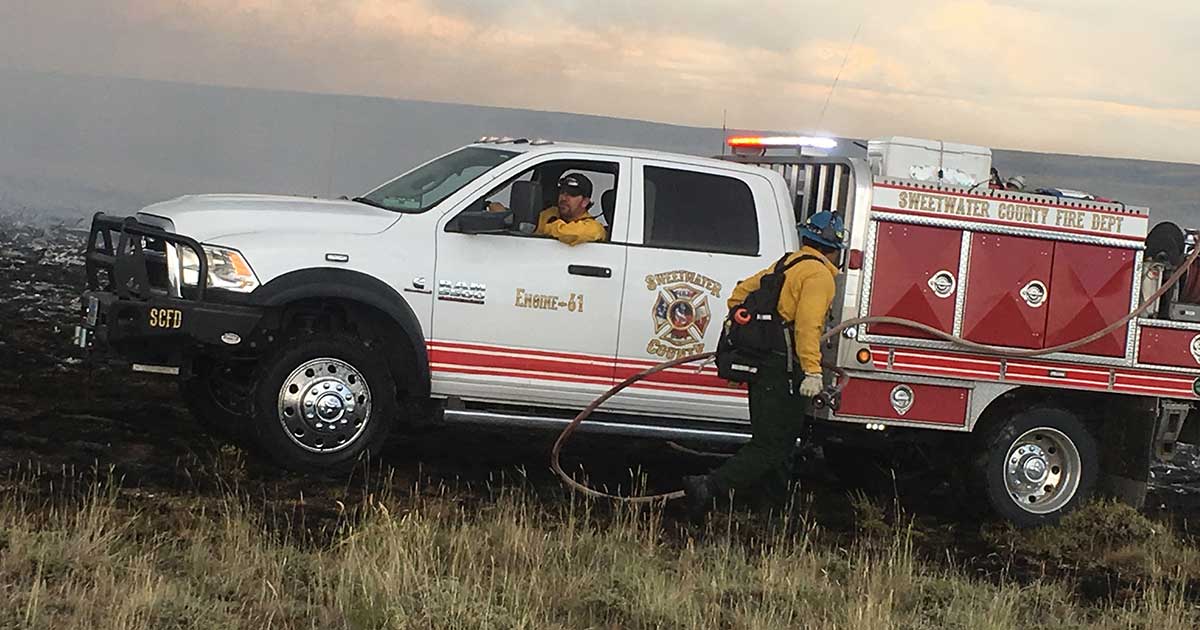 At the December 7 Commission meeting, Commissioners Mary Thoman and Roy Lloyd were reluctant to approve the hiring of two engine managers for the fire department, saying they needed to start considering how much money was going in the service.

Advertisement – The story continues below …

Commissioner Lloyd questioned whether the department should be as large as it is to cover the amount of land it occupies.

â€œDo we need such a large department to cover these needs? Lloyd asked.

He added that legally the county can provide more than it is required to provide to the fire department.

Sweetwater County Fire Director Mike Bournazian said the department needs to be able to respond seven days a week, 24 hours a day, and that they sometimes have overlapping fires. He also noted that other fire departments in the county deal with emergency medical services (EMS), which means that around 80% of calls from other departments go to EMS. Meanwhile, the Sweetwater County Fire Department responds to more than 100 calls a year all of which are related to the fires.

â€œYou don’t need it until you need it,â€ Bournazian said of his firefighters.

Commissioner Thoman said her opinion would not be popular, but before hiring new staff they need to start looking at what the fire department really needs to operate effectively.

â€œWe have to start making some tough decisions and really looking at some of the departments and things that we have. And I’m not saying we have to delete this department, but I think we have to have a special working session on the fire … to analyze this. In the future, we have to figure out how to become more streamlined, more efficient, and I would just like to ask that, and wait to hire more additional staff until we determine exactly how we want to move forward, â€ , Thoman said.

Bournazian agrees to have a discussion regarding the fire departments in the county, and that he has always been available to have these discussions. However, he said he believed the full-time Chief Engineers positions were necessary.

â€œI believe for retention and sustainability the two full-time positions should be the priority. I would love to discuss the amount of seasonal staff, but without offering a permanent position, we’re going to be a revolving door, â€said Bournazian.

He added that with a smaller department like his, it’s difficult to bring in Engine Leaders anyway because of the same positions that get a higher salary at the federal level, and because there isn’t has no advancement after the engine manager in his department unlike the federal fire organizations.

While Commissioners Thoman and Lloyd wanted to suspend hiring until they can organize a workshop on fire services, Chairman Randy ‘Doc’ Wendling said the workshop would not be held in the Next 30 days and they couldn’t leave the fire department without the proper personnel.

â€œThere is going to be a transition period in which we will still have to fight the fires,â€ said Wendling. “We don’t have a Plan B right nowâ€¦ I just don’t see how we can step back and risk not ensuring the public safety of our residents in the county.”

Bournazian said he always thought there should be a discussion about setting up a collective fire department in the county. He added that he thought it would be more efficient, but he is not sure that other districts and departments agree with this as well.

At the Dec. 7 meeting, the commission approved the hiring of the positions with the understanding that they will have a workshop in January to discuss county fire departments with Bournazian and other county fire chiefs.

Bournazian defends the efficiency of firefighters

At the Commission meeting on Dec. 21, the county’s human resources department requested to be added to the agenda for approval to begin posting advertisements for seasonal firefighter positions. However, the Commission did not support the motion to put this item on the agenda.

During a discussion of the county fires later in the meeting, Bournazian clarified what the county fire department does and why he thinks it is operating efficiently.

“We are a forest fire department, this is our main focus based on the direction this board has given me,” Bournazian said.

However, he added that the county fire department also responds to other fires such as commercial, vehicle, residential, structural and gas well fires. He said there are 10,600 square miles that make up Sweetwater County, 60% of which is federal land. On the land that makes up the county, he said, there are 6,700 square miles of unincorporated land in the county, which means it is not in the two main fire districts. or within city limits. This leaves this land unprotected from fire, and it is the land for which the Sweetwater County Fire Department is responsible.

On that ground, Bournazian said there were 400 residential structures, including hotels, cabins, houses and 1,000 additional private structures, not counting industries. These range from shops and garages to barns, restaurants and small businesses.

He said he ran the department under the leadership of the county commission and did so effectively.

He added that his budget had not increased and rather decreased over the past three years. He said his budget to run the fire department was $ 700,000 and that he returned $ 100,000 to the county every year.

Therefore, he questioned why the county fire department was now being watched.

â€œUltimately, the cost to the county taxpayer of a county fire department that covers 6,700 square miles is approximately $ 600,000. So if it’s not a question of shortfall or budget, is it a question of trust? Has something changed on this board: as a department head hired here, I’m no longer trusted to do my job in the best interest of this board and the taxpayer? Bournazian asked.

Commissioner Lloyd said it was not a matter of trust, but rather a simple assessment of the process to ensure it is going in the most efficient way. The Thoman Commission added that it wanted to suspend the hiring of seasonal staff until they could form a committee and discuss how to most effectively run the fire department.

â€œIt’s just part of being responsible and getting the commission to start looking to the future,â€ Thoman said.

President Wendling said that while he agreed that they should form a committee, he was worried about not hiring for too long.

â€œI agree with your concept, I’m just struggling with your time limits when the fires are going to appear and we don’t have a plan,â€ Wendling said.

Bournazian said he just wanted to post ads for seasonal staff, but was not asking to hire anyone yet. He will have to register on the agenda of a next meeting to make a request to launch an advertisement.

In the meantime, Commissioner Thoman will lead the committee which will begin discussing ways forward for the fire service. In January, further discussions will take place in which they will seek solutions for a more efficient County Fire Department.

2021-12-23
Previous Post: Santa Claus or Spiderman? Watch a team of Spanish firefighters surprise hospitalized children
Next Post: The neighborhood response team in the central district is seeking help from the communities in locating the owners of the stolen goods they have recovered. (Photo)