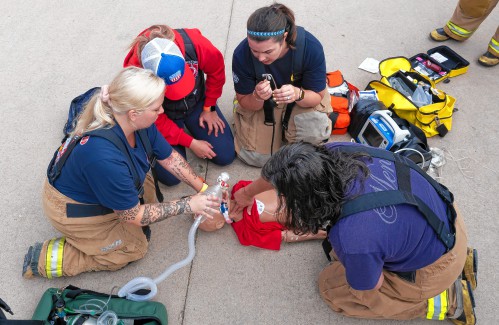 Scott Robinson was a firefighter in Rhode Island when Station Nightclub caught fire in 2003, killing 100 people within minutes.

The fire was caused by pyrotechnics which were set off as the band, Great White, performed their first song. Within minutes the entire site was engulfed in thick black smoke and entrances were blocked off as people climbed over each other trying to escape, choking and burning to death.

After the fire was extinguished, Robinson spent 5 hours removing melted and mutilated bodies from inside the building while friends and families buzzed in the background.

“I had anger issues after the fire because why did we stay so long? Why were we never relieved? Why did I have to remove five to seven bodies before returning to the police station? said Robinson. “The answer was that they knew I would be screwed up and they didn’t want to screw up anyone else.”

Bottled up with what would later be diagnosed as post-traumatic stress disorder, Robinson and his then-wife sought out a therapist in 2006, three years after the fire, for marital counseling.

“It was the first time I spoke about the incident and what I had experienced on the grounds of the fire during these recoveries,” Robinson said. “By the time I was done the therapist was crying and my wife was crying and I realized at that moment that I had to put my equipment back on and never share this with anyone who was unable to hear it. “

As a result of this session, Robinson approached the firefighters union to create an assistance program that would train and educate clinicians and therapists on how to work with and respond to the behavioral and mental health of first responders. He then became a member of the behavioral health program of the International Association of Fire Fighters (IAFF).

“It’s been a passion of mine since 2006 to find clinicians who understand what we’re going through so that we don’t feel like we have to protect clinicians and find someone else to talk to,” said said Robinson. “We see things that normal people aren’t supposed to see and I wanted to find someone who could help us. [firefighters].”

The program was introduced to the state of New Hampshire with the help of Justin Cutting, director of the New Hampshire Division of Fire Standards and Training and Emergency Medical Services, after a colleague informed about the IAFF program. After months of collaboration, a beta testing program was created and tested at Concord this week.

If the results are good, the program will be offered to fire departments across the country.

“Over the past six months to a year, we have been discussing ways to add value and improve the mental health of firefighters and emergency medical service providers across the state,” Cutting said. . “We are very proud to have partnered with them and welcomed them to their program.”

On Thursday, nearly 15 years after Robinson approached the union with his idea, about 70 clinicians and firefighters joined him this week at the New Hampshire Fire Academy in Concord, where clinicians were led by firefighters through four simulations to help clinicians understand the type of stress, anxiety and pressure that firefighters experience on the job.

This week’s training was the first time this program was conducted in the country.

“There are unique considerations and special training that clinicians can benefit from when working with this population that faces a lot of trauma and work stress,” said Candice Alizio, executive clinical director of Forge VFR, a dedicated program helping veterans and first responders. . “We hope this will give clinicians a better idea of ​​what it is like to work in this profession and more effective treatment and a better therapeutic alliance between firefighters and clinicians.

“It’s a profession that erodes resilience and every time I step onto the fire ground it eats away at my resilience and it causes the trauma to imprint faster [on me] than a civilian,” Robinson said. “They go [clinicians] See how heavy the equipment is, what it’s like to walk on crushed stone and work on rocks, dig through motor vehicle wreckage, and how it all affects behavioral health.

Clinicians and firefighters were split into four groups and put through four different scenarios they might see in the field. The first scenario was to extricate a “person” from the wreckage of a motor vehicle.

“There were loud shouting and shards of glass and these tools [Jaws of Life] weigh about 60 pounds each and I had no idea,” said Emily Barton, a licensed clinician. “My heart was pounding, I was sweating. There was a lot of noise and they let us know that there might be relatives or loved ones watching in the background.

The experience, she said, gave her a better understanding and perspective of what firefighters go through and how clinicians can better serve them with that knowledge.

The second simulation involved an unconscious 5-year-old “boy” in cardiac arrest whom clinicians had to stabilize and perform CPR before transport to hospital. Stabilization included clearing their airways.

“I have a small child myself and it was anxiety-inducing to come across a small child,” said Danielle LaPlant, a licensed therapist. “That scenario was really interesting because we come in as a therapist and we want to be there as support and it was support in a different way coming in and trying to save a life. It was very physical. »

LaPlant’s husband is a firefighter and, she says, that gave her more perspective on what he might be going through on a daily basis and how it might impact him.

“When it’s a child and the parents are yelling at you, ‘We can get our child to the hospital faster than that!’, we’re going to feel like we’re not taking care of the child or we’re not doing the right thing.”

The third simulation had clinicians blindfolded and cover their faces with a mask before entering a dark, smoky room where they were then asked to locate a body and remove it from the building.

“We couldn’t see anything, which was scary, but we had to walk through a completely dark room and communicate with each other, find the victim and drag him as far away as possible,” Alizio said. “It was pretty intense but it was a really amazing experience; it gives us the ability to empathize a bit more.

In the fourth and final scenario, clinicians and firefighters worked together to extinguish a small fire in a building lit and controlled by propane.

Agreeing that the scenarios gave them a better understanding of the constant stress, trauma and anxiety that firefighters experience while performing their jobs, clinicians noted that they were eager to put what they had to use. learned, apply it to their professional lives and further assist EMS and firefighters. .

“The more education we can give them to help them understand us and that we’re a little different, the better they can work with us,” said Bill Crews, a Texas firefighter and member of the behavioral health program at the International Association of Fire Fighters. . “I spent 32 years in firefighting and started in a time when we didn’t talk about behavioral health or things that bothered us. Now we see men and women reaching out who don’t wouldn’t have done it before.