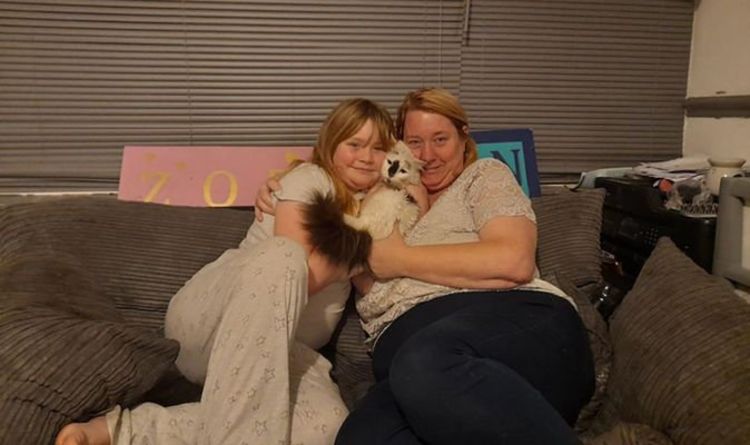 Alison Miles says London firefighters twice visited her home but refused to attempt a rescue. Buddy, a two-year-old cat, had jumped high into the 70ft tree after being spooked by New Year’s Eve fireworks and eventually had to be coaxed by an arborist after three and a half days. Firefighters say their ladders weren’t long enough to reach the cat and it was their crew members who suggested the arborist.

Alison says her nine-year-old daughter Zoe had sleepless nights as their big white cat with black markings was stuck.

A firefighter reportedly told the mother, from Charlton, south-east London: “I don’t like cats.”

Alison is also angry at the RSPCA, who have responded by saying they are working with ‘limited resources’.

Speaking to MyLondon, Alison said: “If I could choose who I pay my taxes to, the fire brigade wouldn’t be there at all.

“The Lewisham fire department came out and an officer said ‘I don’t like cats, I’m not risking my men.’

“We pay their wages and they don’t want to do the work.

“As for the RSPCA, I’m disgusted with them. They didn’t even call to see if he needed treatment.

“We are relieved now. It was the longest three and a half days of our lives.

“To my family and my daughter, that’s not a cat, that’s her baby. She didn’t sleep the three nights he was there. She couldn’t even thank the man who shot her because she was crying so much.”

Buddy was up the tree in Mottingham, south-east London, until Patrick Schroth. of PS Tree Specialists, came out on a holiday Monday to rescue him.

The arborist said: “I was told the cat had been up there three days and three nights and was not going to hang on any longer.

The London Fire Department said firefighters suggested an arborist would be best suited to free the animal.

A service spokesperson said: “A crew from Eltham was present on Monday and the officer in charge considered all options. The cat was higher than traditional ladders carried on fire trucks and an aerial ladder did not couldn’t have gotten close enough to affect a rescue.

“Firefighters explained the situation to residents, suggested an arborist might be able to help, and left so they would be available for another emergency call.

“The firefighters are animal lovers and two of the five firefighters who went to the scene are cat owners themselves. We are very happy to see the cat’s safe return and the old adage of not seeing a cat skeletons at the foot of the trees remains true.”

An RSPCA spokesman said: “As a charity we have limited resources, and over the New Years weekend our Animal Rescue Officer was called out to a number of critical emergencies, including four foxes with leg injuries, a swan with neck injuries, a pigeon with a broken wing, and six orphan kittens abandoned in a parking lot.

“She was in contact with the cat’s owner and understood that the cat did not appear to be injured, and a fire department and arborist were contacted.

“A second animal rescue worker called yesterday (Tuesday 4th January) and we were delighted to hear that the cat was down from the tree safe and sound.”