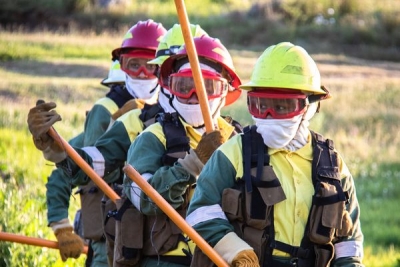 the devastator Particularly frightening was the fire that swept across the left flank of Cape Town’s iconic Table Mountain in April 2021.

“The smoke was so thick,” 26-year-old firefighter Tarren January said, recalling hSince then, the small fire at Devil’s Peak has quickly spread to the University of Cape Town and nearby suburbs.

‘As we walked to the line of fire, there was so much smoke. The wind was terrible, so terrible that at one point we had to back up.

A change in wind direction had pushed the flames as high as multi-storey apartments, shrouding Cape Town in a thick blanket of grey-brown smoke.

“We managed to get through,” explained the firefighter. “But it was very difficult to breathe and the wind was constantly forcing us back and forth.”

Since its inception in 2019, the team, made up mostly of young, working-class women, has helped fight some of the country’s worst wildfires, saving countless lives and millions of property dollars in the process. .

Zimasa Khana fought the flames alongside Jan during that terrifying blaze in April.

“Fighting fires is all about teamwork,” said the 31-year-old, who lives in the shadow of Devil’s Peak in Cape Town’s sprawling Khayelitsha township.

“You are never one person and you are always part of a team. That means you can’t do things alone and you always have to make sure you have backup – and provide backup for others.

Being part of a tight-knit team helped Khana during her first response, which involved a raging wildfire near Camps Bay, an upscale Cape Town suburb, in December 2020.

“It was incredibly scary. That fire was something else, but in the end it was a good day because I was with people who were supporting me. The job got easier after that.

Like Khana, January can remember her first fire like it was yesterday. “It was the one in Noordhoek, near Cape Town, in January 2020. It was very scary, with very high flames. At first I thought I couldn’t do this job, and I even cried,’ she said laughingh.

“I’ve since learned that when you’re part of a strong team, nothing can go wrong. My boss wouldn’t have let us into something super dangerous in the first place. Fighting fires has gotten a lot easier since .

Buhle Tebekwana has been part of the team since its inception in 2019 as part of the All-Women Wildland Firefighting project in partnership with NCC Environmental Services.

His first experience fighting forest fires was in January 2019, when a fire broke out just below the cable car station at the base of Table Mountain. Fanned by high winds and dry brush and vegetation, it spread and jumped the road.

“It was very hectic as houses and cars were burned that day,” Tebekwana said.

“I was very scared and emotional and found myself crying. But we managed to fight the fire.

Dean Ferreira, managing director of NCC Environmental Services and founder of Juliet Crew, is incredibly proud of what his team of 12 local women have achieved over the past two and a half years: “They have done an amazing job, and as a result, they are increasingly called upon.

While the women currently work together in a single unit, her goal has always been to form the Juliet Crew and disperse them among other units, which tend to be male-dominated.

Breaking these traditional gender roles is the main driver for Khana, 31, to become even better at her job. “I want to prove people wrong about what they think women can and can’t do. It was not easy to manage the responses from the community. Some people expect that women can’t do this type of work,” she said calmly.

“However, I’ve found that changing people’s mindsets depends on how you respond to them. I usually explain to people step by step what we do, how we do it and why, making it clear that women and men have the necessary skills to be firefighters.

January explained how people often ask her why she chose her job, assuming that firefighting is for men only.

“My family was also surprised to learn that I wanted to do this, but they were very proud of what I achieved,” she added.

“I believe that if you put your mind to it, anyone can do anything. On the other hand, if you tell yourself you can’t, then you won’t.

Tebekwana’s story is similar. Like her colleagues, she is determined not to let any opponent influence her. Instead, she wants to channel that skepticism into becoming better and better.

“People tell me a lot of things, but I don’t listen. Being a firefighter isn’t easy, but I love it.

Such passion is one of the prerequisites for anyone who wants to join the “first-class” unit, Ferreira explained.

“If you’re just looking for a job, this isn’t the place for you because being a firefighter isn’t just a job.”

Being physically and mentally fit is another non-negotiable, the 35-year-old firefighter said.

Fighting fires in the dry mountains around Cape Town is notoriously grueling.

Fire crews often have to climb a mountain for 10km or more, with all their gear on their backs just to reach wildfires, said Ferreira, who describes how Juliet’s crew undergo military-style training to build their ability.

“If you can’t do it because your fitness is lacking, you’re of no value to your colleagues.” Being in good shape is essential.

While the women have only known each other for a few years, January, Khana and Tebekwana see each other as sisters rather than colleagues.

“We live together Monday to Friday and come home Saturday to Sunday. We became very close,” January said.

During the week, the crew live together in their temporary station on the upscale Vergelegen wine estate, an hour’s drive from Cape Town.

Having a permanent base would make a huge difference for the Juliets, allowing them to be on standby on a rotational basis and deployed from there.

“When the Devil’s Peak fire broke out, we were all home when the call came in on Sunday,” January said.

Since the Devil’s Peak fire, the Juliet Crew have featured prominently in the South African media, and there’s even a documentary on the way on the women.

“Having all these cameras and the media wanting to know this and that was pretty exhausting,” January said with a smile.

“Everyone wants a piece of us, and we have to give it to them because we want to tell our story and inspire others.”

“There are a lot of young women and girls who look up to us because we are pioneers and want to be like us. What I can tell them is that they must not give up on their dream of becoming a firefighter. Go ahead and aim higher. Don’t let people tell you otherwise.