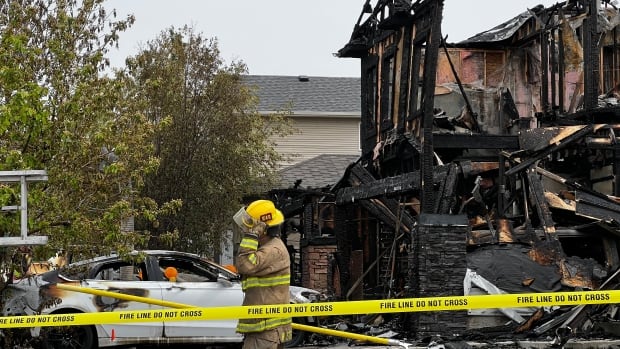 Less than 24 hours after four residences in the community of Evanston, northwest of Calgary, were badly damaged in a two-alarm house fire on Friday afternoon, fire crews were called to a second blaze house with two alarms in the same neighborhood on Saturday morning.

Around 4:45 a.m. Saturday, neighbors called 911 to report a burning house in the 100 block of Evansmeade Common NW, the fire department said in a statement.

When crews arrived on the scene, they reported that there were two single-family homes engulfed in flames.

Officials said three adults and six children inside the two-story homes were safely evacuated, along with residents of nearby homes.

According to the fire department, the two houses were significantly damaged by the fire and three other exposed houses nearby suffered minor damage due to the heat.

Fire crews used large air currents of water to battle the flames. The cause of the fire has not yet been determined.

Calgary police and Alberta Health Services were assisting at the scene to ensure the safety, health and well-being of residents, the statement said. No injuries were reported among residents or first responders.

A Calgary Fire Department investigator is trying to determine the cause and origin of the fire, which was about two kilometers south of a separate structural fire that occurred Friday afternoon in the 200 block of Evansglen Close NW

Fire crews are expected to remain on scene Saturday to handle rescue and general operations.

The fire department asks anyone with photos, videos or any other information regarding this fire to contact them at [email protected]