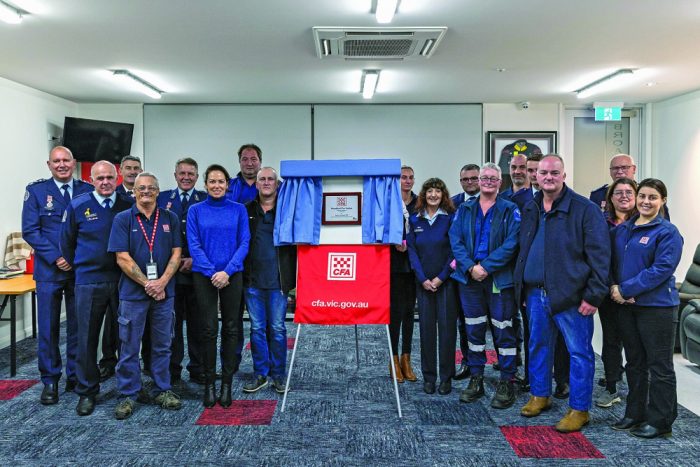 Three years after its commissioning, volunteers from the Broadford Fire Department celebrated the official opening of their new fire station.

The station, at the corner of Hamilton and Govett streets, has three parking lots, a large brigade meeting room, exit rooms and separate changing rooms for men and women.

The station also includes a workshop and a separate outdoor hangar, training yard and office. Special facilities include a compressor room where breathing apparatus cylinders can be filled, which supports brigades across the region, particularly those in the Hume, Mitchell and Murrindindi watersheds.

Members of the brigade were joined by MP for Northern Victoria and Minister for Emergency Services Jaclyn Symes and Acting Chief CFA Officer Garry Cook to officially open the $2.3million building.

“It’s exciting to have a new facility suited to our dedicated volunteers and our growing Broadford community,” she said.

“The drive-in engine compartments are fantastic as we no longer have to back up, and the extra concrete at the rear of the building is ideal for on-site training.

“These modern facilities allow us to get trucks in and out of the station quickly, which really improves our overall service to the community. “

Mr Cook said it was fantastic to officially open the new facility for the brigade and the wider community.

“This new station will be an asset to the thriving Broadford Fire Brigade, enabling our volunteers to continue doing what they do best – protecting lives and property,” he said.

“Broadford volunteers are experts in urban environments and wildfires, and this new station now matches the professionalism of its members. “

Broadford has a long history of firefighting, with the Broadford Rural Fire Brigade established in 1934 and an Urban Fire Brigade in 1947, merging over 30 years ago to form the current brigade.

Broadford Firefighters also played a significant role during the 2019-2020 Black Summer bushfires, with members traveling in strike teams to Wodonga and NSW to support firefighting efforts and take on roles incident management.

Ms Symes said the brigade was also integral to the response to the 2009 Black Saturday bushfires, which affected the surrounding community.

“I’m beyond thrilled to see this station finally open – I know how long this brigade has been campaigning for new facilities, so it’s a proud moment to have helped deliver them and to see them operating,” she said.

“The new fire station provides members of the brigade with the modern base they need to continue their important firefighting work and to give back to the community.