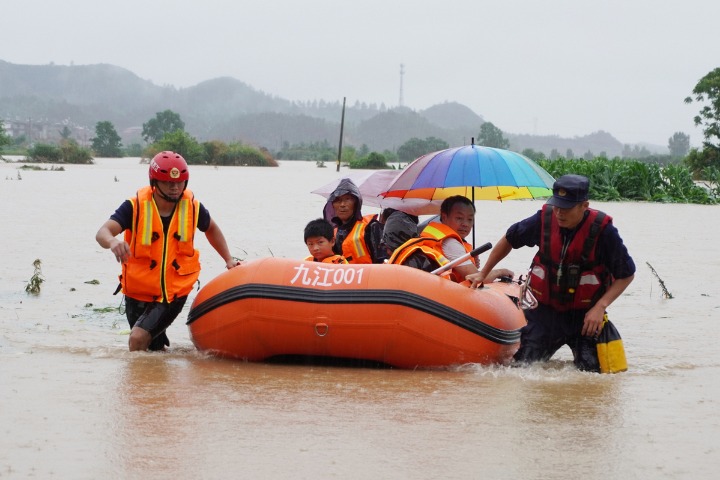 A team of firefighters honored for their role in rescues

A team of 1,075 firefighters have been honored as role models by the publicity department of the Communist Party of China Central Committee for saving more than 13,000 people from flooding in Jiujiang, Jiangxi Province.

Qin Xuhua, a member of the Jiujiang Fire and Rescue Team who participated in flood relief along Poyang Lake in the province in July, said this year’s disaster was more severe than the six previous rescues in which he had participated.

On July 7, the Qin team received phone calls from the city’s three counties (Hukou, Duchang, and Pengze) almost at the same time, asking for help with the rescue.

Qin traveled to Gulou Village, Pengze County, where flooding had submerged the first floors of residential buildings. He and another member of the team evacuated about 240 villagers from the buildings and took them to county shelters with a motorboat that could hold eight people at a time.

On July 12, the water in Poyang reached a record high of 22.6 meters, more than 3.6 meters above the warning level.

â€œIt was the most difficult flood rescue task ever,â€ Qin said. “We couldn’t work on a rotational basis as before as the limited number of staff traveled to multiple locations at the same time.”

For most of the month, Qin and his teammates worked about 15 hours a day and consumed only bread and bottled water.

â€œThe river’s current was as fast as 1.5 meters per second, which is double the flow speed of the previous flood on average,â€ he said. “The boats would be hit on the side and could not cross the river directly. I rode against the current and made a detour into the village.”

Qin used a rope to tie the boat to houses and a ladder to rescue villagers stranded from rooftops or second floors.

Some people also asked Qin to evacuate their belongings. Qin needed to persuade them to leave as soon as possible without wasting any time.

“In the fast currents, the boat was in danger of overturning, and we also had to reassure the frightened villagers that we would send them to safety,” he said.

“We won’t risk anyone’s life, and for every job, we prepare for the worst possible situation.”

Confidence comes from the intensive daily training of their team, top rankings in competitions with their provincial counterparts, accumulated experience in disaster relief and skills exchanges with teams from foreign countries.

“Overall, the goal of our team is to achieve more efficiency under the principle of ensuring the safety of every rescuer,” he said.

It is normal for Qin to be on call 24 hours a day and be away from home for a month. He said he felt sorry for his wife and two sons, aged 8 and 4.

â€œOther kids have parents who play in parks with them on weekends, but my sons usually don’t,â€ he said. “However, I do not regret devoting myself to the glorious mission and I feel rewarded every time the people I save smile and applaud me.”

Meanwhile, petrochemical business groups in Jiujiang are increasing the risk of catastrophic fires, requiring more attention from the city’s fire and rescue team.

However, for 15 consecutive years, no serious fires broke out in the city under the protection of the team.

In 2017, a warehouse at a city chemical plant caught fire. The team sent 90 firefighters and five robots to the scene. Team members extinguished the blaze, in which no one was injured, and prevented sewage from flowing into the Yangtze River.

Xiang Weiqiang, a 23-year-old team member, said their work is as ordinary as anyone else’s.

â€œI don’t worry about my safety during my duties, although I may panic when I hear about firefighters being killed. It’s my job and I’m getting used to it,â€ he said.

“My parents also support my work. And to maintain the honor of our team, I plan to equip myself with more skills.”