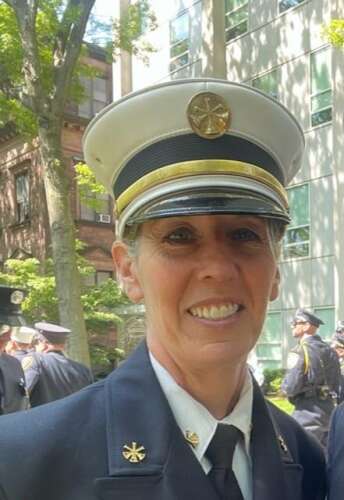 A life of firefighters and paramedics

Eileen Parlato will retire as Battalion Chief of the East Haven Fire Department on Friday, June 17. She was the first woman hired into the career service, thanks to the foresight of chef Wayne Sandford. And she credits Chief Doug Jackson for promoting her to battalion chief in 2005, which was also a female first for the city. Photo courtesy of Eileen Parlato

East Haven native Eileen Parlato has spent the past 28 years serving the City of East Haven through the East Haven Fire Department. On June 17, she will retire from her position as a paid battalion commander, but plans to stay close to home and continue to serve the city and its people.

Although Eileen had spent nearly 30 years of her life helping people through emergency medicine and firefighting, her first professional wish was to become a doctor.

“But the means weren’t really there,” Eileen recalls of her youthful aspirations.

When she learned she could still function in the medical field as an EMT, she jumped at the chance and took an EMT course.

“My brother, Freddy, was already a volunteer firefighter in the city and they were doing medical calls,” Eileen recalls. “So once I got my EMT license, I joined the volunteer fire department.”

In 1993, Eileen transferred to the city’s paid fire department and two years later attended paramedic school to improve her knowledge and interest in the rescue services. The town itself did not have a full paramedic service until around 2005, according to Eileen.

“When I was first hired, firefighters and battalion chiefs were the only ranks other than firefighters and training officers,” Eileen recalls of how the East Haven Fire Department was structured at the time.

“Since then we’ve added captains,” she explains of the department’s growth over the years, “but that was long after I became battalion commander.”

While East Haven has both a volunteer fire department and paid duty, four teams make up paid duty and each team has its own battalion chief, of which Eileen is a part.

“Battalion chiefs direct the day-to-day operations of the city fire department, under the direction of the fire chief and deputy chief,” Eileen explains.

“I don’t know anyone who can do this job without feeling like they want to help others,” Eileen says of the proverbial fabric into which all EMTs, paramedics and firefighters are cut. “That’s pretty much all we do, helping people in need.”

Firefighting can take stamina and discipline, as can the nature of the job, but Eileen says, “I think the same goes for, for example, people who work with children with special needs. specials. Everyone’s here to do a certain thing they’re good at, and that’s what I found myself good at.

Eileen says she remembers many good times in her nearly three decades of helping people, including the joy of helping deliver babies around the world. And Eileen has fond memories of going to schools to talk with the children about fire safety.

“I still remember when we had a strong [school] program at the time,” recalls Eileen. “I was stationed at one of the remote fire stations and we had a little girl come to the fire station. She had written, in pencil on the sheet of paper, the names of three boys who were playing with matches. She wanted to let us know,” Eileen recalls with a heartfelt laugh.

On the other hand, Eileen remembers those larger incidents that haunt the mind; those tragic emergency calls that are never quite forgotten.

For Eileen, two incidents she will never forget involved plane crashes in town. In a crash, a father and son lost control of their plane departing Tweed New Haven Airport and crashed into an East Haven home, killing two girls inside the home . The pilot and his son also died.

“And there was another time when a student pilot and a teacher crashed their plane,” Eileen recalls. “I was there for that. The student survived. A year and a half later, the student found me on Facebook. He held out his hand and wanted to thank me.

In her personal life, Eileen says that after being hired into her lifelong career in firefighting, “I went back to college, then I ended up having two kids, so college was put on hold. I have about a year left to get my bachelor’s degree in fire science at the University of New Haven, so that’s what I’m going to do after I retire. It’s on my to-do list and I feel like if I don’t do it now, I never will.

At 53, Eileen feels young and likes to think she has another career ahead of her.

“I have a second life that I can live. Who knows where my path will take me? The medical field has always interested me. My daughter aspires to apply [physician assistant] school, which I’m super jealous of because I always wanted to be a doctor,” she says.

As for volunteer work, Eileen was a vaccinator at the height of COVID, helps out with the East Haven Food Pantry, helps Clean Up East Haven, helps deliver Rotary’s annual Thanksgiving dinners, and is a active member of Team Rubicon, an international disaster response team.

And in keeping with Eileen’s belief in volunteerism – and without wasting her years of experience as a paramedic – she will keep her paramedic license up to date and say, “I will volunteer with the emergency service. ‘East Haven Arsonist Making Medical Calls.’ once she is off the department’s payroll.

“My parents always taught me to give back,” says Eileen. “Volunteering and giving of your time when you can. Both of my parents received the Mayor’s Award of Merit for their volunteer work in town, so they were my example.

Although leaving her career in the fire service can be bittersweet, Eileen says, “I have loved working with all the firefighters over the years. It was a great race, and I wouldn’t have changed at any time.

“I will be leaving the career side of firefighting and EMS,” Eileen concludes, “but I will continue to do what I love on the volunteer side. At Team Rubicon, we follow a saying: ‘If not me, then who?’ And that’s how we try to see it. If I don’t, then who will?